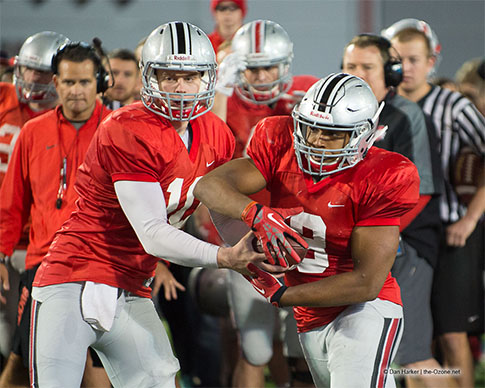 Antonio Williams is competing to be the backup at RB
Vitals

Overview: Antonio Williams was one of seven true freshman from the signing day class of 2016 to enroll at Ohio State in January for the start of the spring semester … he practiced with the team during the 2016 spring drills … Williams was a consensus 4-star prospect (Rivals, 247Sports, Scout and ESPN) coming off a prep career in which he gained 7,999 yards rushing and averaged 178.8 yards per game for his career with 81 touchdowns scored … he had three consecutive 2,000-yard seasons (2,150 as a senior; 2,267 as a junior; and 2,170 as a sophomore) and he had at least one 80-plus yard run all four years on varsity … he was rated as the No. 5 running back prospect nationally by Rivals and No. 6 by 247Sports … ESPN had Williams ranked No. 10 among running backs … he helped coach Scott Crisco’s Comets to an 8-4 season as a senior … is the son of Renea and Keith Williams.