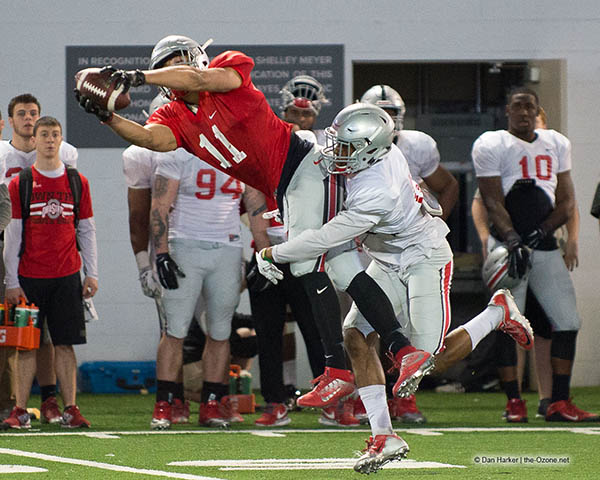 Austin Mack with a catch in practice
Vitals

2016: Played in 11 games as a true freshman, mostly on special teams … caught two passes for 15 yards

Austin Mack was one of six true freshman who enrolled in classes at Ohio State in January and competed in the team’s 2016 spring drills … had a productive and impressive spring drills, including having his black stripe removed – a first for a spring drills true freshman – and signaling he is doing what it takes to be a key member of the team … spent three days this summer interning in New York City at Goldman Sachs as part of the Real Life Wednesdays program … Mack was a consensus 4-star (Rivals, 247Sports, Scout and ESPN) prospect coming out of high school with could run, catch and return kicks … he scored 49 career touchdowns, including six on kickoff returns, and had 2,672 career receiving yards off 167 receptions with 24 touchdowns … he gained 718 yards rushing as a senior when injuries forced him into action as a back … still caught 41 passes for 805 yards in 2015 and helped the Knights, coached by Kyle Lindsay, to the third round of the Indiana state playoffs … had a breakout junior season when he caught 69 passes for 1,062 yards and 15 touchdowns … is listed among the Top 12 receiver prospects nationally by 247Sports (No. 10) and Scout (No. 12) … is the son of Shannon and Ernest Mack.