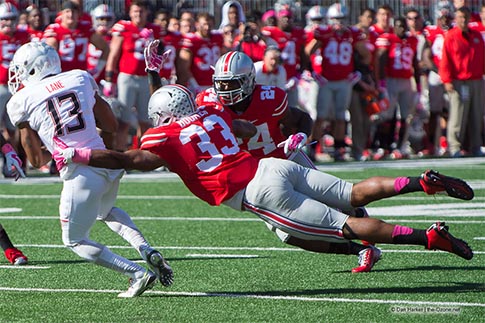 Dante Booker is the No. 1 at Sam for the Buckeyes
Vitals

2016 Season (Junior): Booker was injured in the season opener and took a medical redshirt … he was the team’s starting Will linebacker to open the season.

2015 Season (Sophomore): Booker played 98 snaps on defense and another 99 on special teams for 197 total plays as a sophomore for the 12-1 Buckeyes … he recorded 22 tackles with a career-high game of five tackles vs. Penn State, including four solo stops, four-tackle games vs. Virginia Tech and Maryland and three solo tackles vs. Michigan … was awarded his second Varsity O letter.

2014 Season (Freshman): Booker played in 11 games for the 2014 College Football Playoff national champions as a true freshman … he had his first collegiate action with 11 plays on defense vs. Kent State and he played on special teams in 10 additional games, including the final eight games of the season when he averaged just over 13 plays per game … he had a high game of 21 plays vs. No. 1 Alabama in the Allstate Sugar Bowl … also had 20 plays vs. Wisconsin in the Big Ten championship game … earned his first Varsity O letter … he was named an OSU Scholar-Athlete for maintaining at least a 3.00 grade point average for the academic year.

More on Dante: The 2013 Ohio Mr. Football, Dante Booker was considered one of the very best players in the nation with a five star rating from 247Sports and a No. 13 overall ranking … the first defensive player to win Ohio Mr. Football since Andy Katzenmoyer in 1995, Booker was rated the No. 2 outside linebacker by 247Sports, the No. 4 OLB by Scout and the No. 4 inside linebacker by Rivals … ESPN rated him No. 8 on the outside … additionally: a Top 100 player nationally by Rivals and Scout and No. 130 on the ESPN 300 … Associated Press Division III all-state in 2012 and 2013, and the defensive player of the year in 2013 … totaled 126 tackles as a senior and lead St. Vincent-St. Mary to back-to-back state championships, including a perfect, 15-0 record in 2013 and a 13-2 mark in 2012 … also had 24 tackles-for-loss, eight sacks and two interceptions for coach Dan Boarman’s Fighting Irish as a senior … named in 2013 a Parade All-American, USA Today All-American, U.S. Army All-American, the Akron Beacon Jourrnal player of the year and the Greater Cleveland Sports Awards’ high school athlete of the year … had 90 tackles and 14 TFLs as a junior and 157 tackles and 11 sacks as a sophomore … teammate of 2014 Buckeye recruit Parris Campbell … is the son of Nicole Hartman and Dante Booker Sr. … father played collegiately at Auburn and in the Canadian Football League.

Also: Booker was named Academic All-Big Ten for the 2015-16 campaign and he was named an OSU Scholar-Athlete in 2014-15 … he is majoring in sport industry.