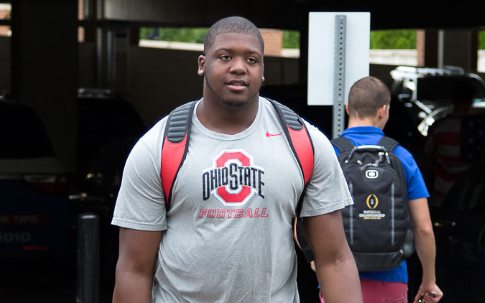 2016 Season (Junior): Was named second team All-Big Ten by the coaches and the media in his first season as a starter … helped Ohio State set a school record with 776 yards of total offense in the win over Bowling Green … part of an offensive line that has helped Ohio State lead the Big Ten in total offense.

2015 Season (Sophomore): The sixth man along the offensive line all season, Jones played in all 13 games for the 12-1 Buckeyes, including seven games in which he lined up on offense (vs. just special teams situations) … was in on 131 plays and had six games where he was in on double-figure play totals, including a high of 16 plays vs. Hawai’i and Maryland and 15 vs. both Rutgers and Illinois.

2014 Season (Freshman): Jones earned his first Varsity O letter in 2014 as he played in 10 games as a true freshman for the College Football Playoff national champions … played in a career-high 41 snaps vs. Kent State and had a Big Ten-game high of 19 snaps on offense vs. Rutgers … was in for 112 plays for the season.

More on Jamarco: Jones was a consensus four-star prospect and a Top 100 player nationally … he was rated as high as the 63rd-best player in the nation overall by Scout and he also had high overall rankings of No. 74 (ESPN), No. 76 (247Sports) and No. 94 (Rivals) … among the 10 best offensive tackle prospects nationally, with No. 6 rankings by both Scout and ESPN and No. 7 rankings by Rivals and 247Sports … despite missing first half of his senior season with a shoulder injury, Jones earned Illinois Coaches Association first-team Class 6A all-state honors and Champaign News-Gazette all-state accolades … helped De La Salle, under the direction of coach Dan O’Keefe, to the second round of the Illinois Class 6A state playoffs … a 2014 Under Armour All-American Game participant and two-time all-Chicago Catholic League honoree … is the son of Urica Jones.