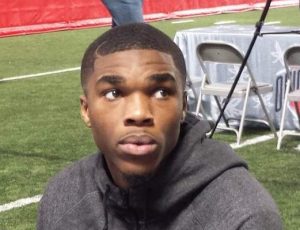 Jeffrey Okudah was an early enrollee for OSU
Vitals

U.S. Army All-American Jeffrey Okudah is a unanimous 5-star recruit and considered the No. 1 safety prospect in the nation according to both Rivals and ESPN … considered one of the Top 10 players in the nation overall, with 247Sports and ESPN ranking him No. 8, and Scout and Rivals Nos. 12 and 16, respectively … a tremendous athlete who also had the No. 1 “athlete” ranking as a senior by Scout … his coverage skills even had him ranked as the No. 1 cornerback, by 247Sports … one of the Top 2 players out of talent-rich Texas this recruiting cycle and an American Family Insurance all-USA defensive back … posted 43 tackles, five pass break-ups and 795 total offensive yards in helping South Grand Prairie, coached by Brent Whitson, to the Texas class 6A state playoffs in 2016 … named second-team Class 6A all-state as a senior by the Associated Press … averaged over 24 yards per catch as a receiver in 2015 and also contributed 46 tackles and four pass break-ups … finished second last summer, to Ohio State signee JK Dobbins, at the Nike+ football ratings competition at The Opening in Beaverton, Ore. … Okudah is the son of the late Marie Okudah … his guardians are Jane and Patrick Obodo.