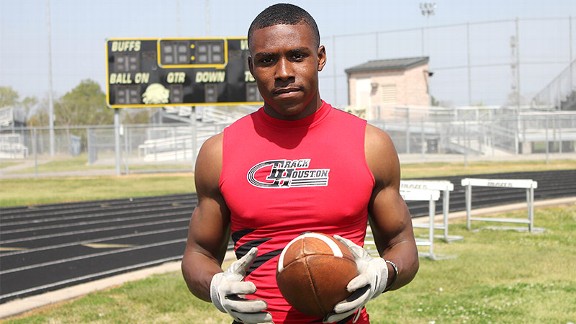 Kendall Sheffield is rated as the No. 1 cornerback coming out of junior college by ESPN, Rivals and 247Sports … he is the No. 4 junior college prospect overall by ESPN … he will be a transfer to Ohio State from Blinn College in Brenham, Texas and he will have three seasons of eligibility with the Buckeyes … in 2016, he played defensive back and returned kicks for Blinn and recorded 31 tackles, two interceptions and 11 pass break-ups, plus he scored touchdowns on both punt and kickoff returns … Sheffield was a consensus 5-star prospect in the 2015 recruiting class out of Thurgood Marshall High School in Missouri City, Texas … he signed with Alabama and then redshirted the 2015 season with the Crimson Tide before transferring to Blinn prior to the 2016 season … as a prepster, he was a Under Armour All-American, an all-USA first-team selection by USA Today and a first-team Associated Press Texas 5A all-state selection in 2014 … he played for coach James Williams … rated the No. 2 cornerback by Scout and No. 3 by ESPN … overall rankings were as high as No. 9 by Scout and No. 12 on the ESPN 300 … Sheffield was outstanding as a sprinter, as well, winning the 2014 Texas state 5A 110-meter and 300-meter hurdles championships and repeating as 110-meter champion the next year … he is the son of Shelia and Cecil Sheffield.