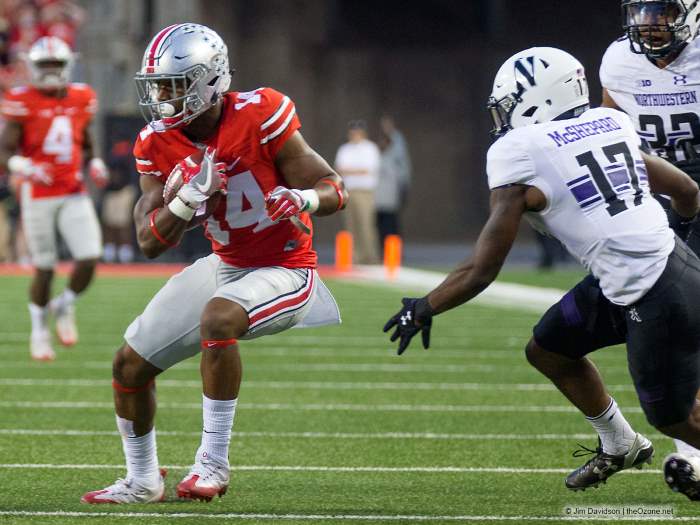 K.J. Hill will be relied on heavily in 2017
Vitals

2016: K.J. Hill played in 11 games as a redshirt freshman in 2016 … he caught 18 passes for 262 yards and a touchdown … his touchdown came in the season opener against Bowling Green … it was the Buckeyes’ first touchdown of the season …

Overview: K.J. Hill redshirted in 2015, a season in which he came close to getting playing time for a team star-studded at receiver and with three of those players now in the NFL … Hill had a hand-injury this spring, but still competed in spring drills while wearing a cast … is majoring in sport industry … coming out of high school Hill was a consensus 4-star receiver who was named a U.S. Army All-American after an outstanding senior season for coach Brad Bolding … he helped the Charging Wildcats to an 11-2 season and to the second round of the Arkansas state 7A playoffs, catching 58 passes for 1,023 yards and 11 touchdowns plus rushing for 386 yards and seven more scores … he had 63 catches for 1,143 yards and 16 touchdowns as a junior as North Little Rock advanced to the state playoffs … the No. 1 player in the state, Hill was also considered a Top 20 receiver with a No. 16 rating by ESPN and 247Sports and a No. 18 rating by Rivals … was rated among the Top 150 players in the nation by all the rating services, including No. 153 on the ESPN 300 … advanced to the 7-on-7 finals at The Opening this summer … a highly regarded basketball player as well.