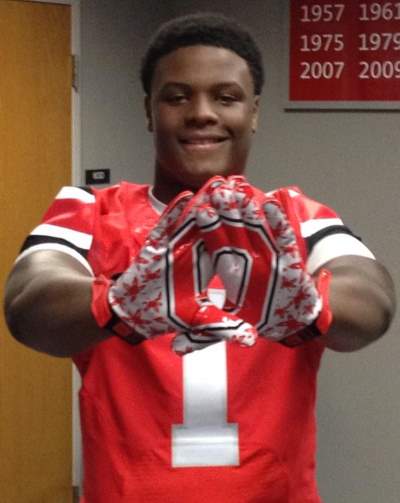 Malik Barrow had a strong spring in 2017
Vitals

Overview: Barrow enrolled in classes at Ohio State in January of 2016, in time for the start of the spring semester … he did not practice, but continued to rehabilitate his high school injury … he was a 4-star lineman (Rivals, 247Sports and ESPN) who played well for IMG Academy, in Bradenton, Fla., before an injury ended his season … had three tackles-for-loss and an interception in an early game vs. Marimar … he played three years at Tampa Catholic for coach Mike Gregory before transferring to IMG as a senior, where he played for coach Kevin Wright … Barrow was a first-team Florida 3A all-state performer as a junior after a 19 tackles-for-loss season … he totaled 158 career tackles with 31 tackles-for-loss and 17 quarterback sacks … is the son of Anissa and Malcolm Barrow.