Happy Wednesday, everyone! It’s not the end of the week yet, but you’ll have a new episode of Accost The Field to listen to at some point today. That’s almost as good as the weekend, right?

We are now 84 days away from football.*

* – Offer valid for only certain definitions of “football.”

Don’t forget to check out yesterday’s installment if you haven’t yet.

Now please join us as we continue our countdown of the 100 greatest Buckeyes of The Ozone era (1996-present).

Plus, we’ll preview one of this season’s 100 biggest personnel matchups.

Greatest Buckeyes Of The Ozone Era 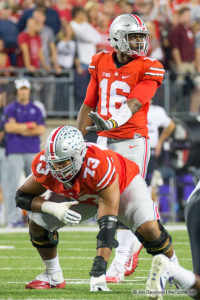 The list of players who have started along the offensive line for the Buckeyes as true freshman recently is both short and distinguished.

You’re probably thinking of Orlando Pace right now. If so, congratulations. He did it in 1994.

And after Pace there was… Michael Jordan. End of list.

Jordan won a starting job right out of camp in 2016 and has been a consistent contributor along the line ever since.

He was named a freshman all-American that season. That was validated when he went out of the Fiesta Bowl against Clemson with a leg injury, and his absence was immediately apparent.

Jordan was named first-team all-conference in 2017 by the Big Ten’s coaches.

With another year of improvement and experience this fall, he would likely place even higher on this list in 2019.


Auburn is annually one of the more fascinating college football programs to follow from afar. The Tigers have two kinds of seasons: 1) National title contention. 2) Fanbase screaming from the rooftops to fire the coach.

Gus Malzahn is entering the first season of a 7-year, $49 million contract, which means he can’t legitimately be considered on the hot seat until at least mid-October.

They enter the season as one of the nation’s most talented programs, but have a fairly difficult schedule.

They open with a neutral site game against Washington in Atlanta on opening weekend. They have LSU at home on September 15th, and then they have to travel to Georgia and Alabama in November.

That’s the kind of gauntlet that talking heads love to pretend that every SEC team goes through.

As anyone who can remember 2011 already knows, seasons with a bowl ban can quickly go swirling down the toilet after a loss or two.

However, this game is early enough in the season that the Rebels might be able to pull off an upset here.

What We Can’t Wait To See


The former Michigan QB transferred to UCLA this offseason. It gives him the chance to play under a former 49ers coach who knows how to develop winning college quarterbacks. That’s the kind of opportunity you can’t pass up.

There is every reason to believe this will be an ugly year in Westwood.

Jim Mora left the cupboard relatively bare, and it always takes a season or more for a coach to install a new style of offense that doesn’t match his existing personnel.

This will also be the fourth straight season with a new offensive coordinator for the Bruins.

None of that is great. But it will be fascinating to see what Speight can do as a square peg in Kelly’s round hole of a system.

Thomas Barber is the middle linebacker for Minnesota’s defense, putting him in line to be the guy trying to tackle Dobbins on a lot of running plays.

Barber was outstanding in his first year as a starter in 2017, recording 115 tackles including 10.5 for loss. He earned a spot on the third-team all-conference squad.

However, he struggled against several of the teams he faced with bigger and better offensive lines. He had double-digit tackles in seven of his last nine games, but was held to just seven against Michigan and Wisconsin.

If teams can get their offensive linemen to the second level and block Barber, they can run for a lot of yards.

The Wolverines had 371 yards on just 37 carries against the Gophers. The Badgers went for 287 on 39 rushes.

If the Buckeyes are running the ball against the Gophers and Barber isn’t the one making tackles, it’s going to be a long day for the maroon and gold.