Calabassas, California wide receiver Mycah Pittman has released his Top Five via Twitter and the Buckeyes made the cut. They were joined by Alabama, Florida, Nebraska, and Oregon. One month earlier, he released a Top 10 which did not include Oregon. From his Top 10, he has eliminated Michigan, UCLA, Washington State, Notre Dame, LSU, and Georgia. 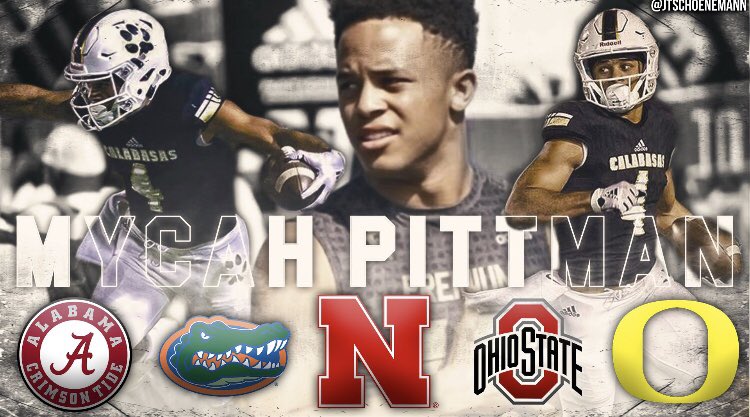 Pittman (6-0 195) is ranked the No. 2 receiver in the state of California per the 247Sports Composite. He is the No. 11 receiver in the 2019 class and the No. 64 player overall. He visited Florida twice this spring and the Gators are seen as the favorites by some.

Pittman is a talented playmaker who attacks the football in traffic. Even though he is not tall, he can make plays over cornerbacks due to his athleticism, hands, and timing. He is not afraid to go over the middle, and when he does catch a pass on a crossing route, he is dangerous after the catch.

Urban Meyer has said in the past that Ohio State isn’t going to spend the resources to recruit California unless there is serious interest on a player’s part. The longer Pittman keeps the Buckeyes involved, the harder Meyer and his staff will work to land him.

Two days ago, the Buckeyes received their first commitment from a 2019 wide receiver when 5-star Texas prospect Garrett Wilson entered the fold. Wilson is arguably the most dynamic receiver in the 2019 class. Pittman has some similarities to Wilson.

The Buckeyes have offered a number of Texas receivers, and following his commitment, Wilson vowed to bring more Texas players with him. One of those players might be Texas quarterback Grant Gunnell, who could be nearing a decision in the next month or so. Once the Buckeyes land a quarterback, more receivers may begin joining the class.