Woods provided a necessary calm for Ohio State in the second half, allowing the Buckeyes to overcome a deficit and then withstand a late run from the Illini over the final 20 minutes of the game.

Ohio State turned the ball over 19 times, but their defense held Illinois to just 19-58 shooting (.328) from the field, which was ultimately the difference in this game.

After trading the lead back and forth over the first eight minutes of the game, the Buckeyes went on a 9-0 run to make it 24-16 with 10:33 to play in the first half. Freshman guard Duane Washington had a three-pointer and a layup in that span.

Washington finished with nine points, but his +/- of +14 was the third-best on the team.

A 22-8 run for Illinois over the next 10 minutes would give Illinois their largest lead of the game at 38-32, however. Ohio State sophomore forward Kyle Young dropped in a hook shot to cap the scoring in the first half and cut Illinois’ lead to four points.

In the second half, OSU head coach Chris Holtmann made a concerted effort to get sophomore center Kaleb Wesson involved. After scoring just five points and playing 10 minutes in the first half due to foul trouble, the Buckeyes went down low to him immediately in the second half.

A couple of quick baskets by Wesson cut the Illini lead to two, but Illinois was able to continue finding the basket on their end of the court as well.

The Buckeyes finally regained the lead at 52-51 on a mid-range jumper from Washington with 13:23 to play. A layup by sophomore guard Musa Jallow and a three from freshman guard Luther Muhammad made it 59-53. The lead was then stretched to 10 points following a layup by Jallow and a pair of free throws from junior forward Andre Wesson.

Keyshawn Woods made it a 13-point game with a three-pointer a few minutes later, and from there the Buckeyes deflated the ball and held on for a 10-point win.

Kaleb Wesson scored 13 points and seven rebounds on the night, but finished with a +20 in just 21 minutes of play.

Keyshawn Woods scored a game-high 18 points on 6-10 shooting from the field. He also played 32 minutes coming off of the bench as Chris Holtmann opted to go with Woods in the second half at point guard. Starter CJ Jackson only played six minutes in the second half after hitting just 1-5 shots from the field in 14 minutes of play in the first half. Jackson also turned the ball over three times. Woods wasn’t flawless in the second half, turning the ball over three times himself. He did score 12 points in his 20 minutes of second-half action, and was a perfect 5-5 from the free throw line. Throughout the game he provided a veteran presence, and doing so on the road can’t be overstated.

+ On Sunday, Chris Holtmann said that it’s important to win the games that you are supposed to win. Whether he was talking about this game or not, any time you can get a win on the road, it’s an accomplishment and something to be appreciated. Road wins in the Big Ten are not going to be easy this season, and there may not be many of them, so when you can get one, be happy about it.

+ At one point in this game, the Buckeyes were 7-15 from the three throw line. They finished on a 16-17 run that kept Illinois at arm’s length throughout the second half. This was a very physical game from both sides and Ohio State made the Illini pay for their part in it.

+ Musa Jallow continues to show an expanded game. He scored 11 points in this one on 3-6 shooting, including 1-2 from three-point land. Jallow also scored a couple of baskets in the paint. His confidence is high right now and as long as he keeps shooting, he will continue to help in other areas as well. Jallow’s nine rebounds tonight were a game high.

+ Luther Muhammad returned earlier than expected from a dislocated shoulder against Minnesota. He was in the starting lineup, but wasn’t sporting his normal No. 1 jersey. Instead he was wearing the spare No. 12 “blood jersey” because his jersey didn’t get packed. He wasn’t exactly expected to be ready to play. Ready he was, however, and played a game-high 35 minutes. He was part of Ohio State’s outstanding team defense on the night. Muhammad’s three-pointer to give OSU a 6-point lead in the second half also sparked them when they were looking for some momentum. 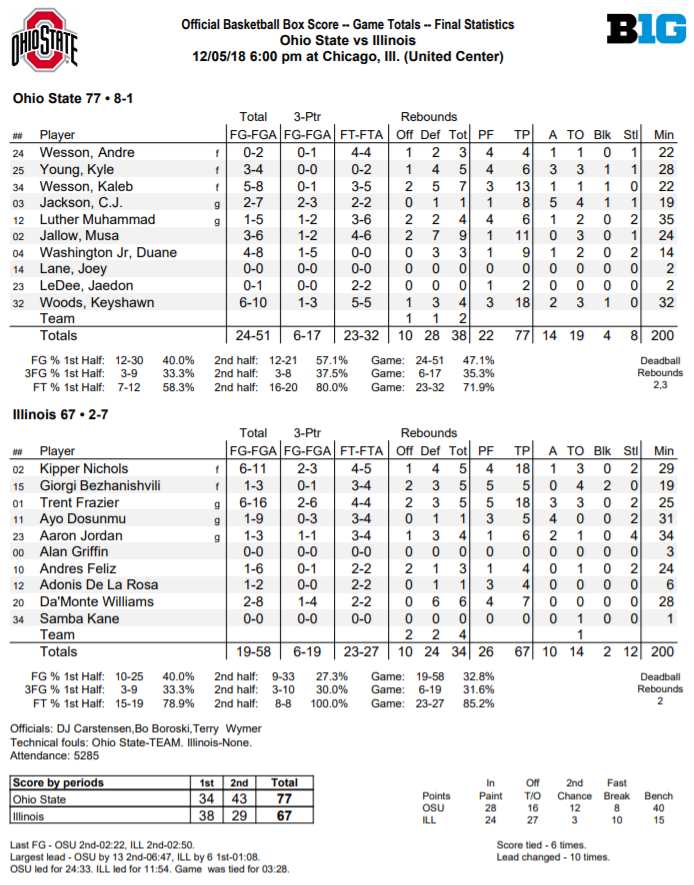