Andre Wesson added in 12 points on 4-of-7 shooting and 3-of-4 from three-point territory.

Ohio State led for a total of 26 seconds. Their last lead was 4-3 following a layup by Kaleb Wesson with 17:30 remaining in the first half. That lead disappeared 20 seconds later due to a Lamar Stevens three-pointer.

Four minutes later, Penn State built the lead to 14-4 with an 11-0 run, with five of those points coming from Mike Watkins.

Duane Washington stopped the bleeding with a three-pointer to make it 14-7, but the Nittany Lions responded with a 7-0 run, putting the lead well into double figures.

The Buckeyes were able to knock the lead down a bit following a three-pointer and a layup from Kaleb Wesson, making it 23-16 with 6:08 to play in the first half. Three-pointers from Seth Lundy and Myreon Jones sandwiched a three from Andre Wesson. John Harrar added a layup for Penn State to give the Nittany Lions a 33-21 lead with 2:29 to play.

A layup and free throw from Kaleb Wesson got the lead down to 37-27 with 46 seconds remaining, but Penn State answered with a three-pointer from Curtis Jones, and then Myreon Jones stole a bad pass from DJ Carton and was fouled. Jones hit both free throws to extend the lead to 42-27 at the half.

Penn State opened the second half with a basket from Lamar Stevens, but Andre Wesson responded with back-to-back three-pointers to make it 44-33. Myles Dread then answered with a three of his own to build the lead back to 47-33 with 18:06 remaining.

The lead grew to 18 points following a second-chance basket from John Harrar and then a three-pointer from Lundy. A pair of free throws from Duane Washington dropped it down to 52-36, but a dunk by Harrar and another three from Izaiah Brockington gave PSU their first 20-point lead at 56-36 with 15:10 to play in the game.

Ohio State answered with a 6-0 run via two free throws from Luther Muhammad, a dunk from Kaleb Wesson, and two free throws from Duane Washington. The Nittany Lion lead fluctuated for the rest of the game between 13 and 18 points, with no run ever coming from the Buckeyes.

Up next for Ohio State is a home game against Minnesota on Thursday at 6:30 pm. 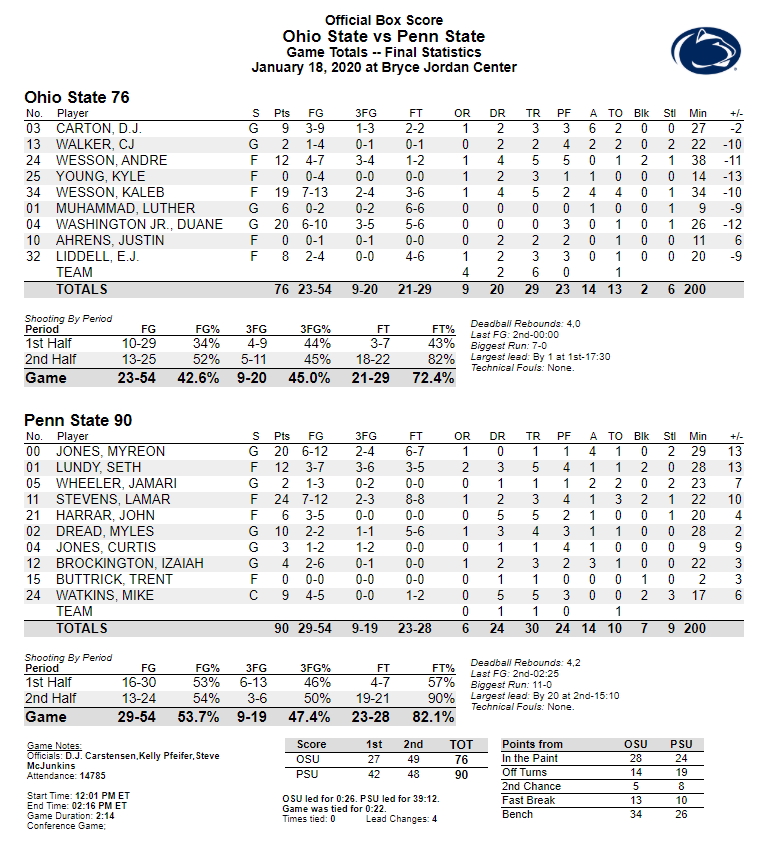