The win was the first in three attempts for the Buckeyes.

The Wesson Brothers scored 11 points a piece and combined for 14 rebounds.

It was a slow start for the Buckeyes, as they didn’t get their first points until a putback at the 15:43 mark of the first half to cut Northwestern’s lead to 7-2. A short jumper from Miller Kopp a couple of minutes later made it 13-4.

Ohio State responded with layups from Kyle Young and Duane Washington. Following another basket from Kopp, Washington and Justin  Ahrens dropped in consecutive three-pointers to cut Northwestern’s lead to 15-14.

After some baskets were traded by both teams, Arens hit a three to make it 19-19 with 7:56 to play in the first half. Four free throws from Andre Wesson gave the Buckeyes a 4-point lead shortly thereafter.

Two minutes later the lead grew to 30-23 following an Andre Wesson three-pointer, which was then followed by a DJ Carton three.

Yet again, however, the Buckeyes faded down the stretch in the first half, allowing Northwestern to close on a 9-2 run to make it 38-35 OSU at the half.

The Wildcats then tied the game with a three-pointer from Pat Spencer with 18:40 to play. Following a Northwestern turnover, Kaleb Wesson hit a three from the right side to give the Buckeyes the lead back at 41-38.

A 6-0 run for the Wildcats made it 44-41 Northwestern, but a pair of layups from Carton gave the Buckeyes the lead again at 45-44. Kaleb Wesson added a pair of baskets to move the lead to five points, which was then knocked back to three points following another basket from Kopp.

Following that two-pointer, however, Ahrens hit a pair of threes from the left wing to give Ohio State a 55-46 lead with 11:30 remaining in the game.

With 7:35 to play in the game and the Buckeyes leading 57-51, Kaleb Wesson picked up his fourth foul and went to the bench. Ohio State went scoreless on its next two possessions, but Carton finally hit a pull-up jumper to make it 59-51 with just over six minutes to play.

Layups by Spencer and Ryan Young quickly made it a 4-point game, but Carton answered with a pair of free throws and then an alley oop to build the lead back up to eight points with 4:29 remaining.

Down the stretch, the Buckeye lead grew thanks to three points from CJ Walker and Washington. Carton ended the OSU scoring with a dunk and a blocked three-point attempt from Boo Buie.

Ohio State outscored Northwestern 39-10 in bench points, and 28-18 in the paint.

Up next for the Buckeyes is a home game against the Indiana Hoosiers on Saturday. Tip is at 12:00 pm and the game will air on ESPN. 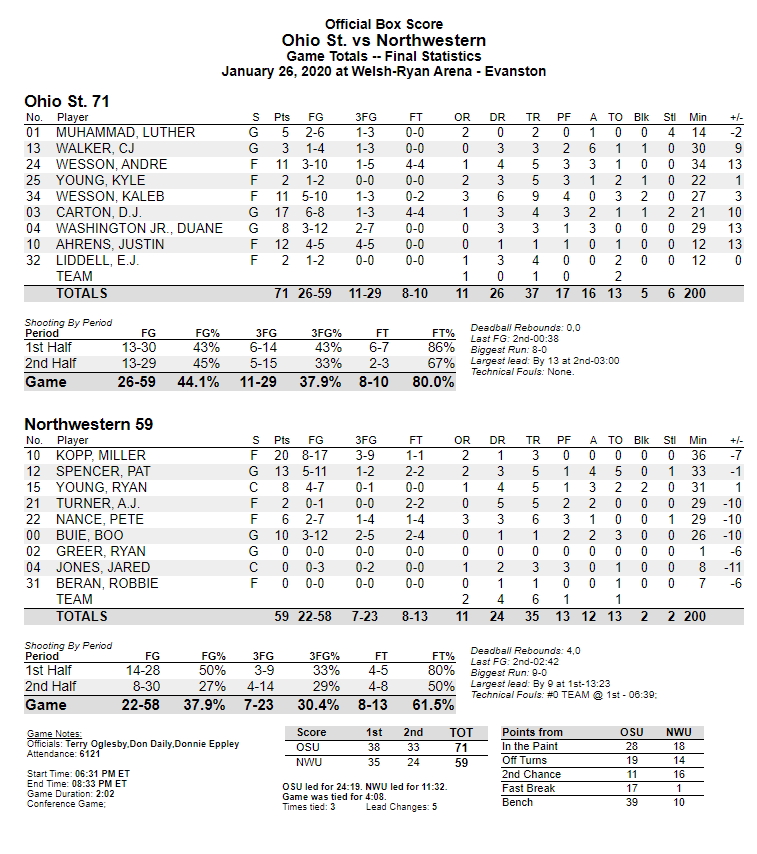