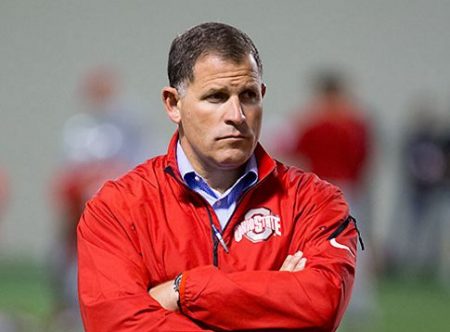 Greg Schiano, who led Rutgers University’s football program for 11 seasons and won five consecutive bowl games before coaching two years in the NFL as head coach of the Tampa Bay Buccaneers, joined the Ohio State coaching staff in December of 2015.

Schiano, whose career includes working as a defensive coach for Penn State (1991-95), the Chicago Bears (1996-98) and the Miami Hurricanes (1999-2000), will work alongside Luke Fickell coordinating the Ohio State defense, and he will also have the title of associate head coach and he will work with the team’s safeties.

Schiano began his collegiate coaching career in 1989 as a graduate assistant at Rutgers before taking the same position at Penn State the following season. He went on to coach the Nittany Lion defensive backfield from 1991 until 1995. From there, Schiano made the jump to the NFL as an assistant coach for the Chicago Bears from 1996-98 where he served as a defensive assistant, including defensive backs coach in 1998.

After the 1998 season, Schiano accepted the defensive coordinator position at the University of Miami for two seasons where he led the Hurricanes to a Top 5 finish in total defense in 2000.

From there, Schiano accepted his first head coaching job at Rutgers University in December 2000 and coached the Scarlet Knights through the 2011 season. He went 68-67 in his 11 seasons in Piscataway, including a 5-1 record in bowl games.

In 2006 Schiano led the Scarlet Knights to an 11-2 record and tied for second in the Big East Conference. That season he was named the Eddie Robinson, Walter Camp, Home Depot and Liberty Mutual national coach of the year as well as the Big East Coach of the Year. That same season, Rutgers earned its first Top 25 ranking since 1976 and was ranked as high as No. 6.

Following the 2011 season in which the Scarlet Knights went 9-4 with a victory in the Pinstripe Bowl, Schiano accepted the head coaching job for the NFL’s Tampa Bay Buccaneers where he coached for two seasons, from 2012-13.

Schiano was born and grew up in Wyckoff, N.J., and attended Ramapo High School. He attended Bucknell University and earned three letters in football, playing linebacker. He was named all-conference as a junior after registering 114 tackles and he was named a senior captain the following year.

After graduating from Bucknell with a degree in business administration, Schiano started his coaching career as an assistant coach at Ramapo High School in 1988. The following year he moved on to Rutgers to begin his collegiate coaching career.

Schiano and his wife, Christy, have four children: Joey, a freshman football player at Bucknell, twin boys and high school sophomores Matt and John, and a daughter, Katie (12).