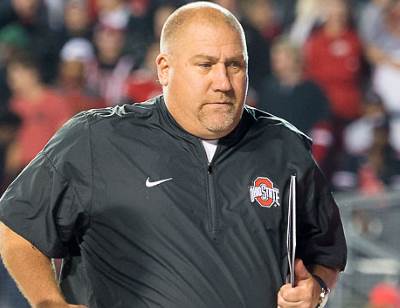 There really was only one choice in Urban Meyer’s mind as to who could replace Ed Warinner as coach of Ohio State’s offensive linemen: Greg Studrawa. And on Jan. 15, the 27-year collegiate coaching veteran joined Meyer’s staff for a second time to take over offensive line duties from Warinner, who developed outstanding lines in his four seasons with the unit but who is moving upstairs into the coaching booth fulltime now to call plays.

Thus, enter Studrawa. He has been offensive line coach the past two seasons at Maryland and he spent the prior seven years on Les Miles’ LSU staff, winning a national championship and two Southeastern Conference titles while tutoring 10 all-conference performers along offensive lines that paved the way for four 1,000-yard rushers. He was offensive coordinator for two years at LSU, a position he also held for a total of 10 years at Bowling Green and Wilmington (Ohio) College.

“I’ve known Greg for a long time, starting with my time at Bowling Green when he was my offensive line coach,” Meyer said. “I know how good of a coach he is. There aren’t many people I’d entrust our offensive line to after the job coach Warinner has done, but Greg is one of them and I’m pleased to have him join our staff.”

Studrawa, who has coached the offensive line for 24 of his 27 years in coaching, comes to Columbus highly regarded and following two seasons – 2014 and 2015 – coaching in the Big Ten Conference on Randy Edsall’s staff at Maryland.

Prior to that, he spent seven seasons in the Southeastern Conference with LSU, coaching under Les Miles with his LSU experience featuring a national championship season during his first season in 2007 and a second trip to the national championship game in 2011 after a 13-0 campaign. Studrawa was a part of LSU’s greatest decade of football during this time, a span that included SEC titles in 2007 and 2011.

Studrawa coached the offensive line his first four seasons in Baton Rouge before a two-year cycle as the team’s offensive coordinator and offensive line coach in 2011 and 2012. His 2011 Tiger offense ranked 17th nationally in scoring at 35.7 points per game, set school-records with nine 40-point games and 35 rushing touchdowns, and helped the team go 8-0 in the SEC with wins over Florida, Auburn, Alabama and Georgia in the SEC title game. His 2012 offensive unit, despite a rash of injuries on the line and a first-year starting quarterback, still went 10-3 overall with all three losses by a combined 13 points.

Among the 10 all-SEC honorees Studrawa coached along the offensive line at LSU were two-time first-team all-SEC pick Herman Johnson and first-team honorees Ciron Black, Will Blackman and Alex Hurst. Blackman (2011) and Johnson (2008) were also each named first-team All-Americans.

Studrawa is a Buckeye. He was born in Fostoria, attended St. Wendelin High School and played collegiately at Bowling Green between 1984-87. A two-year starter along the offensive line, he graduated in 1987 with a degree in business. He has a 1985 Mid-American Conference championship on his playing days resume as well.

Following his playing career, Studrawa coached collegiately for 15 years throughout the state of Ohio. He spent two years as a graduate assistant at Cincinnati (1989-90), six seasons at Wilmington College (1991-96), a year at Ohio State as a grad assistant under John Cooper (1997) and six years at Bowling Green (2001-06), including under Meyer in 2001-02.

Studrawa was Bowling Green’s offensive coordinator between 2003-06, during which time the Falcons were 30-19 overall and defeated both Northwestern (2003 Motor City Bowl) and Northern Illinois (2004 GMAC Bowl) in bowl games. The Falcons were second in the nation in 2004 with a MAC record 504.3 yards per game. In 2003 the unit was third nationally in total offense.

In addition to quarterback Omar Jacobs winning MAC offensive player of the year honors in 2004, Studrawa tutored three first-team all-MAC linemen – Scott Mruczkowski in 2003, Rob Warren in 2004 and Kory Lichtensteiger in 2006 – plus an additional five guys to second-team all-MAC accolades.

Studrawa and his wife, Cindy, have three daughters: Samantha, Katelin and Allison.