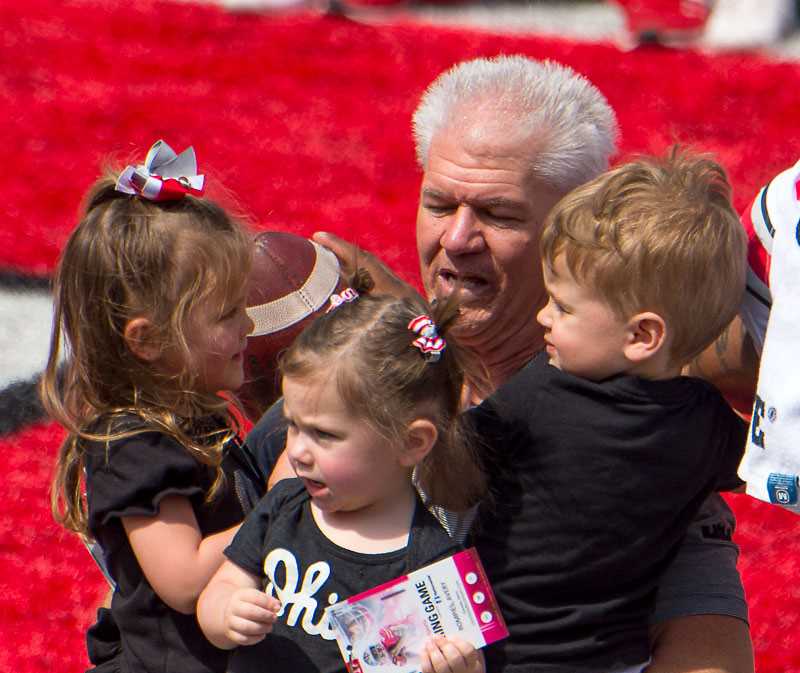 Coombs has had an outstanding tenure as an Ohio State assistant coach. Every one of his starters at cornerback who have exhausted their eligibility has reached the NFL as a draft pick or free agent:

Each of those cornerbacks had outstanding careers as a Buckeye. The duo of Howard and Roby was the only set of cornerbacks from one school in the nation to earn first-team all-conference honors in 2012. Roby, in fact, led the nation with 1.73 passes defended per game, a total that included a school-record-tying 17 pass break-ups, and he was named a first-team ESPN.com All-American. Howard led the Big Ten in interceptions with four and .33 per game.

Roby repeated as a first-team all-Big Ten performer in 2013 — on both the coaches’ and media teams — and was ready for the NFL after his junior season.

Grant made it three consecutive years for a cornerback to be named first-team all-Big Ten when he was honored in 2014 after serving as co-captain of Ohio State’s College Football Playoff national championship team.

Apple was a freshman All-American as a starter on the 2014 national championship team and earned second-team all-Big Ten honors as a third-year sophomore in 2015.

Coombs, for his part, said he wanted to win a national championship with Ohio State and he has certainly done that, as well as being a part of the sixth undefeated/untied season in school history in 2012, Big Ten and Sugar Bowl championships in 2014 along with the CFP national championship, a 31-1 record vs. Big Ten competition, a school-record 24-game winning streak plus a second 23-game win streak, and an NCAA FBS-record 50 wins over four seasons.

The 2017 season will be Coombs’ 35th in coaching, a tenure that includes a highly successful 16-year run as head coach at Colerain High School, located just outside of Cincinnati.

Prior to his position with Ohio State, Coombs spent five seasons at the University of Cincinnati, including three years as associate head coach in addition to his responsibilities as the team’s defensive backs coach and special teams coordinator.

Hired away from Colerain by Brian Kelly after the 2006 high school season, Coombs was part of Kelly’s three Cincinnati teams that were 33-7 overall and played in BCS bowl games after the 2008 (Orange Bowl vs. Virginia Tech) and 2009 (Sugar Bowl vs. Florida) seasons.

After Kelly left UC for Notre Dame after the 2009 season, Coombs stayed on new UC coach Butch Jones’ staff. After an initial 4-8 season under Jones, Cincinnati went 10-3 in 2011 with a Liberty Bowl win over Vanderbilt.

Coombs is a lifelong Ohioan. He grew up in Colerain, graduated from Colerain High School in 1979 and from the University of Dayton in 1983, and has a master’s degree from Wright State (1996).

“Kerry Coombs had an incredible record of achievement as a high school head coach and he is highly regarded as one of the great coaches in Ohio high school football history,” Meyer said when he hired Coombs. “I have watched him coach in high school and at the University of Cincinnati and I have great respect for the way he works. He is a strong recruiter. He knows defense and special teams. And he is an excellent teacher.”

Coombs was a member of the University of Dayton’s 1980 Division III national championship team while studying secondary education. He then charged through the high school ranks: spending two seasons as an assistant at Greenhills High School and four at Lakota before taking over as head coach at Loveland in 1989. Two years later — 1991 — he took over at Colerain.

In 16 seasons at Colerain Coombs’ teams went to 10 state playoffs, including five state semifinal berths. His 2004 team won the Division I state championship with a 15-0 mark that included a record-setting title game win over Canton McKinley, 50-10. The 40-point margin of victory is still the largest in the Ohio “big school” state title game.

Colerain won seven consecutive Greater Miami Conference championships under Coombs from 2000-06, and Coombs had a 161-34 record as head coach. His overall head coaching record through 18 seasons is 167-48.

Coombs sent five of his Colerain players to Ohio State, including Jefferson Kelley in the mid-1990s and most recently Connor and Spencer Smith and Tyler Moeller.

Coombs and his wife, Holly, are the parents of three grown children: son Brayden played collegiately at Miami (Ohio) and is currently on staff with the Cincinnati Bengals; daughter Cortney played soccer at Ball State; and son Dylan is in the Lindner Honors Plus business program at the University of Cincinnati.