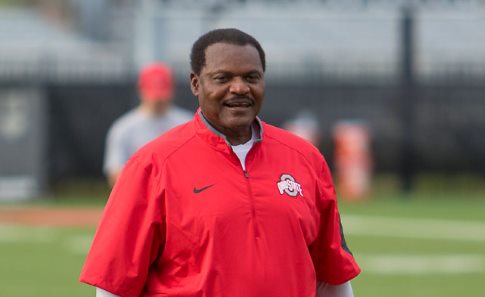 Larry Johnson is in his third season with the Ohio State football program, during which time the team has posted a 26-2 record including 23 consecutive wins at one point, and won Big Ten, Sugar Bowl and national championship in 2014. He was named assistant head coach and defensive line coach at The Ohio State University in early January, 2014.

One really good reason why Johnson is so highly regarded on the Ohio State coaching staff, among his peers and by his student-athletes: no Big Ten Conference program in the last 20 years, outside of Ohio State, has developed more Big Ten defensive players of the year and Big Ten defensive lineman of the year than the 12 that Johnson has coached since 1996.

After coaching nine such honorees during his 18 seasons at Penn State, Johnson has seen Joey Bosa win conference defensive lineman of the year honors twice (2014 and 2015) and the league defensive player of the year award in 2014. Bosa has also been a consensus All-American the last two years and Michael Bennett earned All-America honors in 2014 as well, giving Johnson a total of 10 All-American defensive linemen.

Bosa went on to be the third pick of the 2016 NFL Draft by San Diego.

“I am very pleased that Larry Johnson is an Ohio State Buckeye,” Ohio State coach Urban Meyer has said. “I have great respect for him as a family man, as a coach and mentor of young men, and as a recruiter.”

Mentoring is a critical aspect to the successes Johnson and the student-athletes he coaches have realized.

“I’m a relationship guy and I think in order to get the best out of your players you have to develop relationships,” Johnson said. “I’m also a teacher. I like to teach the basic fundamentals of football. I want guys who are fundamentally sound and have the ability to play fast and to play relentless.”

Johnson grew up in Williamston, N.C., and is a 1973 graduate of Elizabeth City (N.C.) State University with a degree in health and physical education. He came to Ohio State after coaching along the defensive line for 18 years at Penn State, including the last 14 seasons (2000-13) overseeing the entire unit. He spent his first four seasons at Penn State — 1996-99 — as defensive ends coach and special team’s coordinator.

While Ohio State is Johnson’s second collegiate coaching stop, his career includes 20 years of high school coaching in Maryland and Virginia. He knew right away that Ohio State was a place where he wanted to be.

“In just a few hours I could tell that Ohio State cares about football,” Johnson said. “There is a winning tradition that is important here. They care about academics and they care about players, and I like the way Coach Urban Meyer approaches things. He’s a great teacher. He is very organized and this is what I was looking for.”

Johnson came to Ohio State with a resume of accomplishments while at Penn State:

In addition, he coached on a Penn State defense that led the nation in sacks between 2005 and 2009 and was No. 5 nationally in rushing defense from 2004-10. And between 1996 and 2013 Penn State’s defense was a Big Ten Conference statistical champion 14 times, including four times in quarterback sacks and three times in scoring defense.

Johnson spent the first 20 years of his career as a highly successful high school coach. Six times chosen as the Washington Metropolitan Area coach of the year, he guided McDonough High School in Pomfret, Md., to three Maryland state championships and to a 139-36 record between 1975-91, and he also was coach two seasons (1992-93) at T.C. Williams High School in Alexandria, Va. He started his coaching career in 1974 at Lackey High School in LaPlata, Md.

As a player, Johnson was an NAIA All-American and all-conference performer at Elizabeth City State University. He was inducted into the school’s sports Hall of Fame in 1990. He played one year in the NFL, with the Washington Redskins in 1973.

Johnson and his wife, Christine, are the parents of two sons — Larry Jr. and Tony — and a daughter, Teresa. Larry Jr. and Tony both played football at Penn State with Larry Jr. rushing for a school record 2,087 yards in 2002 and later becoming a first-round draft pick of the Kansas City Chiefs and a two-time Pro Bowl selection. Teresa played softball for the Nittany Lions.