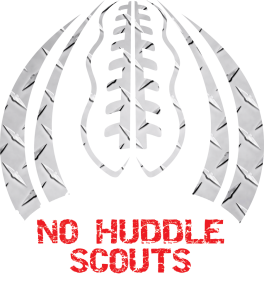 Coming off of a demoralizing shutout loss in last season’s College Football Playoff, followed by the annual exodus of talent to the NFL Draft that sweeps through Columbus each year, the most polarizing discussion surrounding the Ohio State Buckeyes football team, oddly enough, is the backup quarterback situation.

The Buckeyes return the most-experienced quarterback in college football as J.T. Barrett now has 30 starts to his name and will become the schools first 3-time captain this fall. Behind him, however, a solid battle is taking place between Joe Burrow and Dwayne Haskins.

Both signal callers showed glimpses of being an effective starting quarterback in the Spring Game, further dividing Buckeye fans and the respective “corners” they support.

Like the next chapter in the “Twilight” series, Buckeye fans may be defining themselves as “Team Burrow” or “Team Haskins” as the action plays out in front of them.

Below, we take a look at the similarities and differences each possesses as well as how each skill set will translate to the field within the framework of the offense.

Understanding where to go with the football before the snap will go a long way toward the success of a play and subsequent reads that will occur post-snap. In today’s game, more throws are predetermined to limit turnovers, but also increase tempo and efficiency.

Both Burrow and Haskins showed good pre-snap recognition numerous times during the Spring Game. What is more impressive is their ability to “look off” the safeties while coming back to their initial read in rhythm.

Poise In The Pocket

While the first quarter touchdown pass from Burrow to Ke’Von Huguely went into the books as such, the play likely would have resulted in a sack in a real game. The key takeaway from the play was the poise in the pocket Burrow possessed. He was staring down a blitzing middle linebacker and calmly delivered a deep ball right on the money.

Haskins, on the other hand, had an inconsistent afternoon in this category. His footwork came unhinged at times when facing pressure, leading to a few errant throws. In the following set of clips you will see consecutive plays where Haskins had a clean pocket and hurried a throw, immediately followed by a play where he hung in a messy pocket and delivered a strike for a first down. If Haskins’ strength is as a pocket passer, his consistency and calmness within the pocket will need to improve.

As you can see, both young quarterbacks do a number of things extremely well. From pre-snap to post-snap, both men have a good understanding of where they want to go with the ball and they deliver the passes on time. Burrow was able to show the ability to be accurate and effective as he delivered nice passes to either side of the field on designed rollouts, something J.T. Barrett has struggled with to date. It is not entirely clear how much of a running threat Haskins will be based on a glorified “two-hand touch” scrimmage, but he does throw a nice ball, showing tremendous touch on the intermediate and deep passes.

No matter who wins the backup quarterback battle, the offense will be in competent and talented hands, but this competition is far from over. After all, we have seen what a third-string, strong-armed quarterback is capable of, and competition will only raise the level of play within the unit.

Burrow resembles Craig Krenzel, a hard nosed football player who happens to play quarterback. Haskins has the arm strength and effortless release similar to that of Cardale Jones. It just so happens that both of those resemblances are National Championship Quarterbacks, proving both men are capable of winning football if called upon.