When players step their first foot on campus carrying a “5-star” label, people expect their second foot to land right on the playing field.

The focus is often on how good a player is based on their high school accolades and how good they’re going to be when they see the field.

Being recruited as a blue chipper and being talented simply is not enough. To be a playmaker at a place like Ohio State, there must be something more than talent, and that something is always the key.

Too many times, the forgotten part of this process of greatness is the player development and what goes on between the time a good player comes in and when he actually sees the field.

“Everybody comes in with that high-rated talent,” said Buckeye center Billy Price. “The first person I think of is Joey Bosa. He was a freak…an absolute freak. He was 6’5”, 275, running a 4.6…like just a freak, but the strength and conditioning staff and the coaches were able to shape him and craft him and mold him to be that finished product that we’ve seen the past two years or three years that he was here.”

Price believes this development phase is an important part in shaping players and setting them up to be successful down the road.

“And then the development once guys get here, everybody loves these 5-stars, but it’s the development that happens once you are here within these walls that really matters. I think that Coach Meyer and all these coaches have a really good chemistry right now in being able to develop guys into being those three-and-out guys.”

The physical development is often what is noticed most once players are in the program for a few months.

“A guy like Tate Martell for example, he’s a highly-publicized guy,” Price said. “Seeing his body transformation from just 6 months… He took pictures when he came in in January, and then July. You see that much of a change. You see that physical change and that’s huge. And we’ve got to give a lot of credit to our strength and conditioning staff.” 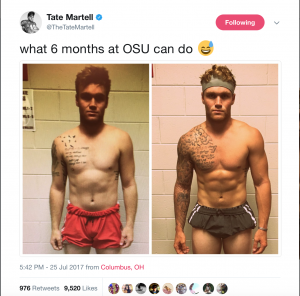 It is also important to note that there is a huge difference between high school football and college football, especially at a program of Ohio State’s stature. Price thinks the adjustment mentally is one of the biggest and most important things to learn.

“The mental aspect of it is I think the biggest,” he said. “Again, you’re coming in an 18-year-old kid. You’re the city king, you can go to Giant Eagle and people will know who you are. People glorify you, but high school ball is so much slower than our college ball. Once you get here and make sure your mind is at the adequate speed for the college game — running backs, quarterbacks, receivers, the ball speed, how fast D-linemen move — everything is so much faster that you have to have that mental aspect behind it.”

There are so many hands involved in getting the most out of every player that comes through Ohio State’s doors. Being a great player is only part of the process. It will get you into to the program, but then the real magic happens. Price recognizes and appreciates the work that the strength and conditioning staff puts into the development of players.

“It’s 100 percent them,” he said. “As the strength and conditioning staff your job is to shape bodies, to push somebody mentally, and to push somebody where they could not go by themselves. That’s what those guys do and they’re the best in the nation. Quinn Barham, Niko Palazeti, Mickey Marotti, and Jeff Uhlenhake. Those guys are top of the line across the country. So, you have to give credit to God for giving you the abilities to do what you can do, but a lot of it is also given to the players and the coaches that are putting the time in to make sure you’re shaped to be the way we need to be to perform on the field.”

At a place like Ohio State where top-tier players are recruited, it is important to understand that players still have to undergo a tremendous amount of development once they get to the program.

All Buckeye players come in talented, but so much of what we see on the field is due to the development from the coaches and the strength and conditioning staff at Ohio State.

And it is this development that turns a good 5-star prospect into a great 5-star player.