Ohio State released their official depth chart for the Oklahoma game late on Tuesday. There are a couple of changes from last week, but nothing major.

+ Perhaps the key change isn’t even a move up or down, it’s the fact that J.K. Dobbins is now listed in bold lettering, indicative of a starter or co-starter. He is listed as an OR with Mike Weber, which he was last week as well. It appears that his stature is rising, however. Or maybe somebody in the football offices simply highlighted his name and then hit Ctrl-B for the heck of it.

+ The offensive line remains the same. Matt Burrell is again listed as the No. 2 at left guard, but when the Buckeyes came out in the second half against Indiana, Branden Bowen was playing left tackle and Burrell was in at right guard. He is clearly the next guy in and Bowen’s versatility is a welcome addition to an offensive line that is getting deeper.

+ The other slight change on offense has Antonio Williams bumped ahead of Demario McCall, even though both are sharing the same OR they had last week. McCall’s absence last week was a bit of a mystery, but he has been dealing with some lingering injuries. We’ll find out more hopefully tonight when we speak with Urban Meyer after practice.

+ On the defensive line, Malik Barrow was the only member of the listed depth chart to not see the field last week. I don’t believe he was on the travel roster, so logistically it would have been difficult for him to play. Defensive tackles Davon Hamilton and Haskell Garrett were involved in the second half, but it is pretty amazing that the Buckeyes played 10 defensive linemen in the first half and they all produced.

+ There are two new appearances on the depth chart at linebacker. True freshman Pete Werner is now listed as the No. 3 Sam linebacker and redshirt sophomore Justin Hilliard is the No. 3 Will linebacker. Hilliard spent much of the spring at middle linebacker behind Chris Worley. Werner was not listed on the participation report from the Indiana game, but I wouldn’t be surprised to see him on special teams this week. Hilliard, meanwhile, had some nice moments in kick coverage last week and he is a guy to watch there again on Saturday.

+ At strong safety, Jordan Fuller and Erick Smith are still listed as co-starters. Fuller got the start last week and it was Smith in there at the end when the backups were in, so there appears to be a clear pecking order. That pecking order didn’t stop Greg Schiano from rotating Smith into the game throughout all four quarters, however. Clearly, this is still a close race. Fuller being the only champion from the secondary last week might earn him more snaps this week — especially if he keeps intercepting passes at the goal line.

+ There are no other changes on the depth chart. The special teams remain the same. Speaking of special teams, keep watching freshman cornerback Amir Riep on kickoff coverage. Also, receiver Elijaah Goins is the fastest guy down the field and he usually starts the havoc. It’s a fun group to watch. I know some people don’t like the short kicks because once out of every 12 times it will go out of bounds or get returned to the 32-yard line, but don’t forget about what it does on those other 11 kicks when the opponent has to start a drive inside the 15-yard line.

+ We should also see some more redshirts burned this week now that Ohio State will have their full complement of players available. 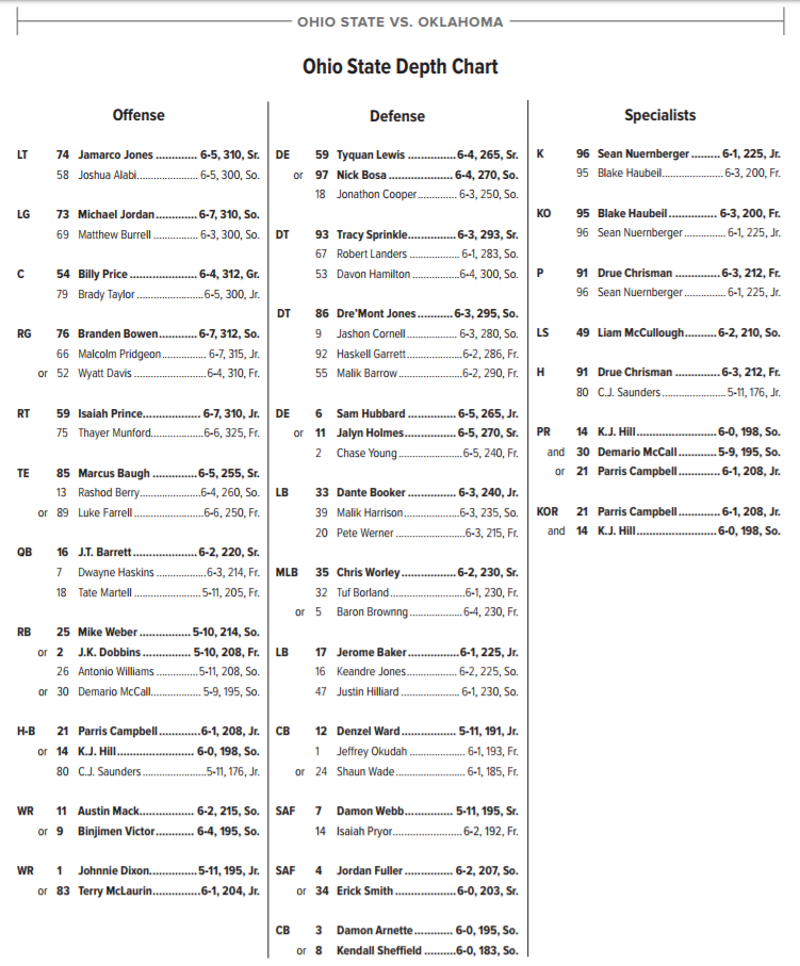