Today is a glorious day because Ohio State has added some new names to the Buckeyes’ depth chart this week against UNLV. The most prominent name isn’t new, but rather a return. Redshirt sophomore quarterback Joe Burrow is back among his peers, and sharing an OR with redshirt freshman Dwayne Haskins.

With UNLV on the schedule this week, the Buckeyes are expected to be able to play more than just their starting quarterback. This means that they need to know who their backup quarterback is. Trying to narrow down precisely when a decision would be made, I asked Kevin Wilson about it. Sorry to say, no such narrowing down was made.

Even after the game, regardless of who takes the field second for the Buckeyes at quarterback, I expect Urban Meyer to say the competition is ongoing and they’ll have some kind of reason for playing whoever they did, but that reason won’t be, “He’s our backup quarterback.”

A real, live, actual new name on the depth chart is true freshman offensive lineman Josh Myers at the No. 3 left guard. Matthew Burrell was out last week and in a boot, but he is listed on the depth chart. Meyer didn’t mention him as being out this week, so we’ll see if he’s good to go.

In an interesting twist, the No. 2 tight end this week will be determined by Ohio State’s cornerbacks coach. How so? Wilson said on Tuesday that Marcus Baugh’s backup will be whichever tight end has the best week on special teams, so when he asks special teams coordinator Kerry Coombs for his input, that’s when the decision will be made.

There is only one change on the defensive side of the ball, and it isn’t with any of the names. Instead, the OR that was listed between middle linebackers Tuf Borland and Baron Browning has now slid up a level and is connecting Chris Worley and Borland. Meyer said this week that Worley is questionable for this game due to his sprained foot from last week.

There should be no need for Worley this week, and this would be a good opportunity to see what Borland can do against a more standard offense.

No other changes were present among the linebackers. This might be an opportunity to get true freshman Pete Werner in the mix. The Sam linebackers have been up and down this season. Werner is listed as a Sam on the depth chart, so maybe with Dante Booker nursing a sore shoulder, we could see Werner’s redshirt burned at some point in the second half.

There are two new additions to the special teams depth chart.

The first is the addition of an OR at kickoff specialist between Blake Haubeil and Sean Nuernberger. Meyer isn’t thrilled with Haubeil’s consistency and they could use more hang time in order to get the coverage units further down the field.

The other new inclusion in the kicking game is cornerback Kendall Sheffield listed at No. 3 punt returner behind K.J. Hill and Demario McCall. Who knows when McCall will be ready to go, but even when he is, they might not put him at punt returner right away. Hill has been reliable, but the returns haven’t really done much to excite Meyer. He did acknowledge this week that they really haven’t had many return opportunities, so a lack of explosion isn’t necessarily OSU’s fault.

Sheffield was a tremendous returner in high school and junior college, and he brings much more speed to the position. He is not as reliable as Hill, but this would be a game to get Sheffield a few touches in order to see what he can do. Don’t be surprised if he does something to get Buckeye fans and coaches excited. 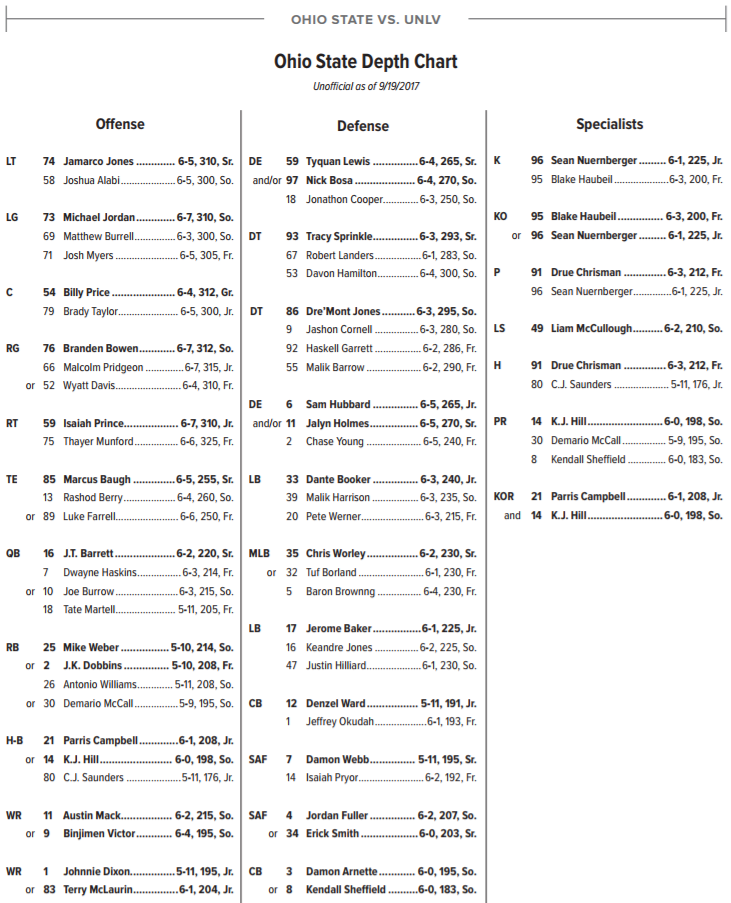