The targeting rule in football — both professional and college — was implemented with the best of intentions.

The rule was created to protect players and to decrease the number of serious hits to the head and neck area of every player on the field.

The penalty of immediate disqualification seems steep to some, but the only way to quell such savagery is to make the penalty so severe that players understand that they must make clean hits.

The safety of the players is paramount, and so even though many “old schoolers” don’t like the rule, it is a necessity in a game being played by bigger and faster men than ever before.

A large part of the disdain for the rule comes from a lack of understanding of the actual rules by football fans.

I believe that after I explain the rules and show you the video below, you will no longer have any questions as to what is, or isn’t, targeting. It is all very simple if you just know the rules.

First, here are the rules as laid out by the NCAA (highlighting is theirs). 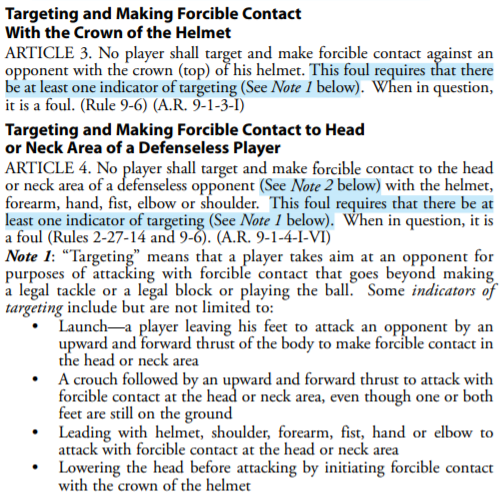 In the first play, Ohio State cornerback Denzel Ward clearly targets unprotected wide receiver Taivon Jacobs using the crown of his shoulder, which is arguably the most devastating quadrant of a person’s body. And Ward targets Jacobs’ entire upper chest region, which is an area of a person’s torso that contains some of a body’s most important organs.

Until players understand that they cannot use their shoulders as weapons against the chests of their defenseless counterparts, we must continue to eject these rule-breakers until there is nobody left on the sideline to field a team.

The second play in the video is an example of how defense should be played. Where Denzel Ward targeted the upper body of Taivon Jacobs using something as dangerous as his shoulder, Michigan linebacker Devin Bush merely pinpointed a very specific area on Brian Lewerke, which happened to be the most protected part of the quarterback’s body — his head.

Ward targeted an entire region of the receiver’s body because he just didn’t care what kind of destruction was leveled. Bush’s hit, meanwhile, kept the area of impact hyper-specific, which limits the bodily destruction by avoiding the body entirely.

The fact that the broadcasting team never even mentioned the word “targeting” should have been your first clue that you don’t know the actual rules. And the fact that no flags were thrown and no call came down from the booth upstairs only reinforces the need for better understanding of the rules by the fans who are too emotionally invested to see things clearly.

After watching the respective plays above, however, you are much better versed in the subject than you were before.

If we are going to make this game safer, we have to hold those players who violate the rules responsible and punish them accordingly. If we don’t stop this epidemic soon, the number of chest contusions and separated shoulders could very well end the game as we know it.

Fortunately, college football’s referees are front and center in making sure these rules are followed and enforced. We can all rest easily knowing that they are at the forefront of making the game safer, and I have no doubts that the number of shoulder injuries will continue to decrease as long as the rules are properly enforced.