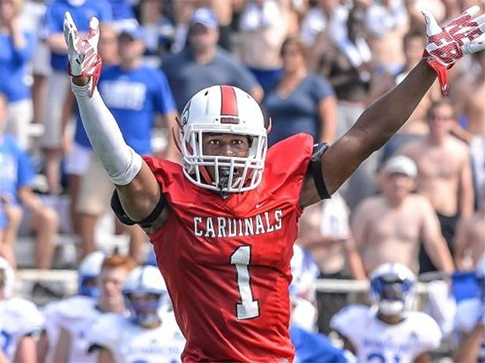 Amir Riep was a 4-year starter at Cincinnati Colerain
Vitals

Amir Riep was a unanimous 4-star prospect and one of the most coveted prospects from Ohio in this recruiting class with more than 40 scholarship offers … a four-year starter for coach Tom Bolden at Colerain High School, Riep is rated as high as the 99th overall player by Scout with Top 25 cornerback rankings by all the ratings services with highs of No. 12 by ESPN and No. 19 by Scout … helped Colerain to its 17th consecutive Greater Miami Conference championship and No. 1 state ranking before finishing 11-1 in 2016 … despite missing three games with an injury, Riep was named all-GMC in 2016 on the strength of 20 tackles and four interceptions, giving him 15 career interceptions … he also averaged 20.4 yards off five punt returns and was named all-Ohio by MaxPreps and to PrepStar’s Dream Team … named all-Southwest District as a junior and a senior … was the GMC defensive player of the year in 2015 with 65 tackles, three forced fumbles and city-leading seven interceptions while helping Colerain to the state semifinals … earned Cincinnati Enquirer all-city, first-team all-Southwest District and second-team Associated Press all-state honors in 2015 … attended The Opening in Beaverton, Ore., prior to senior season … is the son of Katherine Gowdy and Maurice Riep.