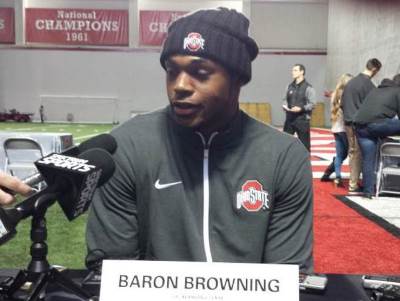 Baron Browning will begin his career at MLB
Vitals

One of the top linebackers in this recruiting class, Baron Browning is a 5-star prospect (Rivals, 247 and Scout) who earned the No. 1 outside linebacker distinction from Rivals, 247Sports and Scout and a No. 2 ranking for OLBs by ESPN … considered among the Top 10 players in this class by Rivals (No. 9 overall) and had a No. 11 ranking by 247Sports … named a U.S. Army All-American and a finalist for the 2016 high school Butkus Award as top linebacker … helped Kennedale, near Fort Worth and coached by Richard Barrett, to an 11-4 season in 2016 and a spot in the Texas 4A state semifinals for the first time in school history … was the state’s Associated Press 4A defensive player of the year with 81 tackles, 10 TFLs and 10 PBUs … also named Fort Worth Star Telegram all-area … the two-time first-team all-state honoree had 74 tackles and eight TFLs as a junior and finished his career with eight forced fumbles … is the son of DeKisha and Barry Browning … father was a two-year football letterman at TCU … brother, Barry Jr., is a Stanford graduate who was a four-year football letterman for the Cardinal between 2007-10.