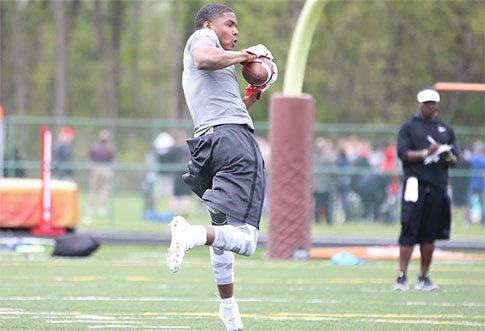 Jaylen Harris brings it in.
Vitals

Jaylen Harris is a consensus 4-star prospect who had an outstanding senior season for Cleveland Heights and coach Mac Stephens … caught 53 passes for 820 yards and eight touchdowns for the 6-4 Tigers and was named first-team Associated Press Division I all-state … one of the Top 150 players in the nation, Harris had overall rankings as high as No. 137 by Scout, which also rated him as its No. 20 receiver prospect … received a No. 118 overall ranking and Dream Team honors by PrepStar … named to the American Family Insurance all-USA Ohio first team … considered among the Top 5 players overall in the state of Ohio (No. 5 by 247Sports), Harris was the top receiver in Ohio and No. 3 in the Midwest according to Scout … as a junior he caught 42 passes for 796 yards and five touchdowns in only seven games, giving him two-year totals of 95 receptions, 1,666 yards and 13 touchdowns … named all-Lake Erie League, all-District and all-Cuyahoga County as a junior and helped his team to the state playoffs … also a standout on the basketball court throughout his career … named 2015-16 Associated Press all-Northeast District as a junior after averaging 14.8 points per game … Harris is the son of Angela and Ronnie Harris.