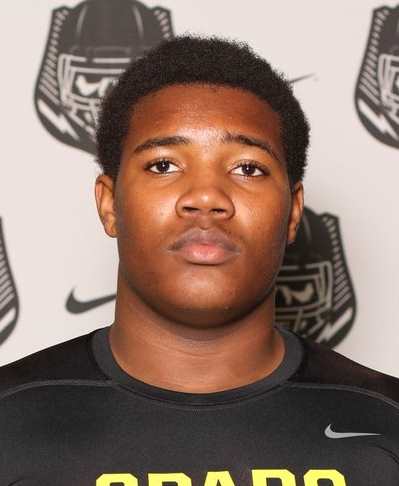 Two-time Associated Press Division II first-team all-state defensive lineman Jerron Cage is a unanimous 4-star prospect who is rated among the Top 15 defensive tackles in his class by ESPN (No. 11) and 247Sports (No. 13) … Scout rates him as its No. 16 defensive tackle … Cage, whose older brother, Daniel, has started 11 games along the defensive line for Notre Dame the past two seasons and will be a senior in the fall, is a member of the ESPN 300 (No. 138) and the No. 3 player in the state according to ESPN … the No. 2 tackle in the Midwest according to Scout … a PrepStar Top 300 All-American … first-team MaxPreps/JJ Huddle all-Ohio selection … two-time Cincinnati Enquirer all-area selection … Cage, a three-year starter for coach Andre Parker, recorded 43 tackles-for-loss for his career, a total that includes 24 quarterback sacks … the three-time all-Southwest District performer was its defensive player of the year in 2015 as a junior when he posted 48 tackles, including 10 sacks … led Winton Woods defenders with 81 tackles as a senior … has also been a standout wrestler throughout his high school career under the direction of coach Jason Dean … is the son of Dionne and Adrian Cage.