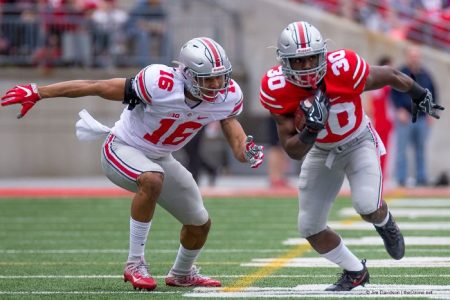 Overview: Two-time all-Maryland and Washington Post all-metro team member Keandre Jones was a 5-star prospect according to Rivals with ESPN, Scout and 247Sports all rating him a 4-star prospect … he was a Top 10 outside linebacker recruit nationally with ESPN ranking him No. 3, Rivals No. 6 and 247Sports No. 8 … he was also considered among the Top 30 players in the nation overall by both ESPN (No. 28 overall on the ESPN 300) and Rivals (No. 30 on the Rivals 100) … a member of the Prepstar Dream Team … Jones helped coach Bob Milloy and his Good Counsel team to a 7-4 season in 2015 by recording 119 tackles, four quarterback sacks and two interceptions — both returned for touchdowns — and repeated as a consensus all-state pick … totaled 77 tackles as a junior with nine sacks for a 10-2 team that was runner-up in the Washington Catholic Athletic Conference … named to the USA Today all-Maryland football team and an Under Armour All-American after senior season … is the son of Lauren Middleton.