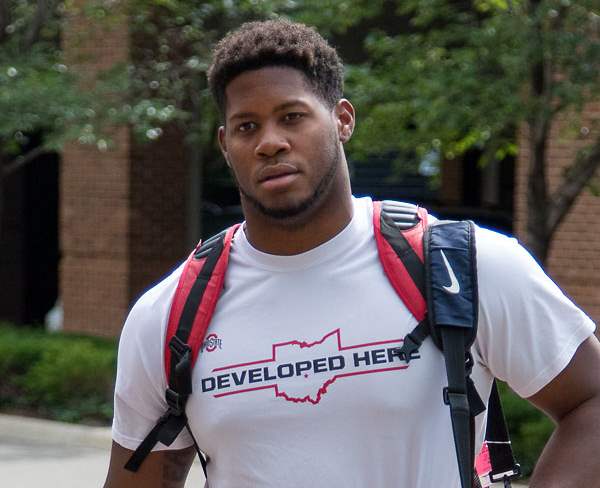 Malcolm Pridgeon worked exclusively at guard in the spring
Vitals

Overview: Pridgeon is only the third junior college prospect to sign a national letter of intent with Ohio State in the last 10 years and the second by coach Urban Meyer, after receiver Corey Smith in 2013 … he announced his decision to attend Ohio State on national signing day and thus became the fifth offensive lineman for Ohio State in the class … Pridgeon played two seasons at Nassau Community College, in Garden City, N.Y., under coach Joe Osovet after a high school career at Central Islip (N.Y.) High … he was considered the top junior college offensive tackle in the nation, by JuCo Football Scouting … he had a 5-star ranking from Scout and 4-star rankings by ESPN, Rivals and 247Sports … he was listed as the No. 3 junior college offensive tackle by both 247Sports and ESPN and he was rated among the Top 5 players overall, including No. 4 by Scout, No 5 by 247Sports and No. 5 on the ESPN JC50 … a two-year all-Northeast Football Conference performer at Nassau, Pridgeon was a first-team NJCAA All-American this past season … he helped Nassau to a 10-0 season in 2014 with the team finishing sixth nationally and defeating Scottsdale JuCo in the Valley of the Sun Bowl game … he was second team-all New York state as a senior at Central Islip H.S. and was rated as a 4-star prospect … he played for coach Joe Taormina … agile and athletic, he was a fine high school basketball player and made the 2014 Class AA all state-tournament team … also competed in track and field … Pridgeon is the son of Peggy White and the late James Earl Pridgeon.