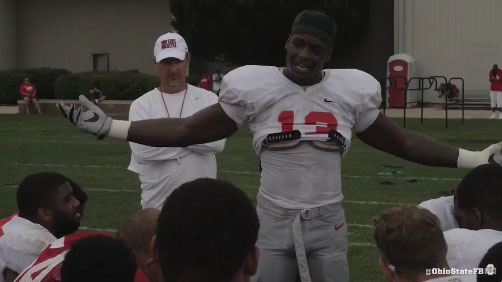 2016: Rashod Berry was a reserve as a redshirt freshman, playing in 10 games and notching seven total tackles …

Berry practiced as a tight end during his red-shirt true freshman campaign in 2015, but moved to the defensive line and practiced as an end in the spring of 2016 … Berry came to Ohio State as a two-time Associated Press all-state honoree, including first-team Division I honors in 2014 … he helped Lorain, under coach Dave McFarland, to a 7-4 season in 2014 and the first state playoff appearance in school history … had 37 receptions for 578 yards and 11 touchdowns as a senior, plus an additional 11 tackles-for-loss, including six sacks, plus six forced fumbles and an interception on defense … considered among the Top 40 defensive ends in the nation, Berry had national positional rankings of No. 20 by Rivals, No. 26 by Scout and No. 36 by 247Sports … had 6.5 sacks and earned second-team all-state honors in 2013 for coach Tony Shoulders … also played basketball … adds to the list of Lorain County players to play football at Ohio State, including Raymont Harris, Matt Wilhelm, Chase Farris and current Buckeye Tracy Sprinkle … Berry is the son of Lashonda Berry