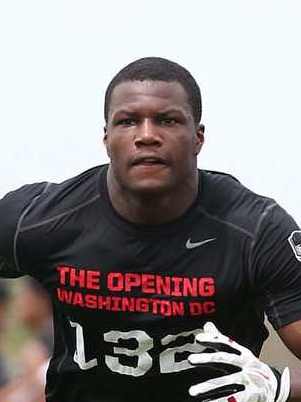 Overview: Wayne Davis redshirted in 2016 as a true freshman. … he was the state of Virginia’s 2015 Gatorade Player of the Year (for athletic excellence, academic achievement and exemplary character), its Associated Press player of the year and a consensus 4-star prospect by Rivals, Scout and 247Sports … he was considered among the Top 25 cornerbacks in the nation by Scout (No. 22) and Rivals (No. 25) with Top 40 status by 247Sports and ESPN … selected first-team 4A all-state as both a defensive back and a receiver as a senior, Davis had 43 tackles and seven interceptions — five of which he returned for touchdowns — on defense and 41 receptions for 731 yards and six touchdowns on offense … after winning the Virginia 4A state title (14-1) in 2014, Davis and Lake Taylor, coached by Hank Sawyer, missed out on a repeat title in 2015 by losing to Salem, 17-14, in two overtimes in the championship game, snapping Lake Taylor’s 29-game winning streak in the process … Davis had five interceptions and broke up 22 passes, plus caught 31 passes for 733 yards and nine touchdowns, as a junior and earned all-state honors … former teammate of current Buckeye defensive end Jalyn Holmes at Lake Taylor … is the son of Takecia Taylor and Corry Cartwright.