One of the most memorable moments in college football’s greatest rivalry actually came on a basketball court. Exactly 17 years ago today, new Ohio State head football coach Jim Tressel took the microphone at halftime of the Buckeyes’ basketball game against… who else? Michigan.

He had already won over many Buckeye fans earlier that afternoon with an impressive introductory press conference, but no one remembers that now. They remember what he said at the Schottenstein Center.

“I can assure you that you will be proud of our young people in the classroom, in the community and most especially in 310 days in Ann Arbor, Michigan, on the football field.”

At the time, Ohio State was just 2-10-1 in its last 13 matchups against the Wolverines, and had gone 0-6 in its previous six trips to Michigan Stadium, suffering a mixture of humiliating blowout losses, national title-crushing defeats, and season-defining disappointments.

In the 6,209 days since Tressel walked off that court to raucous cheering, OSU is 15-2 in The Game, including a 7-2 record in Ann Arbor. He didn’t drop that mic at the Schott that night, but he spent the next ten Novembers doing it over and over again.

In honor of that speech, here are some of the favorite Tressel-era memories from Ozone staffers.

Somewhere between 309 and 311 days after Tressel’s big introduction, I found myself on the camera deck of Michigan Stadium for the 2001 edition of The Game. At the time, Michigan Stadium held nothing but bad memories.

I had traveled up two years earlier, listened to the entire stadium cheer when John Cooper was introduced, and then watched OSU get flagged for 13 penalties to Michigan’s one in a 24-17 loss that ended the Buckeyes’ bowl chances.

Two years before that, I was in the second row of the end zone where Charles Woodson returned a punt. You may remember it. Before that came Tim Biakabutuka, 28-0, and Desmond Howard.

By the time they crossed the border in late November, OSU had already lost four games and was playing without its suspended starting quarterback, Steve Bellisari. Things didn’t look promising.

However, Wells sprained his ankle and missed the second half. In what would soon become classic Tressel fashion, the fill-in quarterback (Kreutzel? Kretzen? something like that…) did juuuuust barely enough and the Buckeyes ended up holding on for dear life for a 26-20 win.

One year later, another win in The Game would punch the Buckeyes’ ticket to the national title game. But at the moment, all that mattered was that the old streak was dead. Long live the new streak.

I don’t have one specific memory, but I do have a story.

For the better part of a century, Michigan football was a bully. A real, true, arrogant jerk. He picked on people. He was rude. Sometimes he even pushed people down stairs. He was basically ungovernable. And after every assault, tantrum, taunt, or tussle, his mom would throw her hands up in the air and tell him the same thing.

“Wait until your father gets home!”

“Yeah, whatever,” Michigan football thought. This was an empty threat from a mother who was at her wit’s end with the world’s worst child. Michigan football had no fears, and there were never any reprisals. They were on a constant warpath, and the Big Ten would flinch reflexively with just the lift of a single Michigan finger.

There was no getting through to Michigan football. No settling them down.

That is, until one fateful evening exactly 17 years ago tonight.

That was the night when Michigan football saw Jim Tressel say those now-famous words.

“…and most especially in 310 days in Ann Arbor, Michigan…”

It was at that moment when the realization hit.

My favorite memory is when Coach Tressel wrote my father a letter before we attended the Ohio State/Wisconsin game in 2009.  I wrote it about last summer.  It was a great honor meeting him at an Avon Lake high school football game this past fall.

If I had to pick something exclusively Ohio State football related, it would have to be the “in 310 days” speech that culminated in the 2001 victory in Ann Arbor.
I never viewed Coach Tressel’s speech as a challenge that would bring him mockery if Ohio State did not win.  I immediately felt like “Finally.  A coach who gets it.”.
The mere fact that Ohio State was able to go into Ann Arbor, a place where they had not won since 1987, and ruin Michigan’s Big Ten championship hopes, were just too good to be true.  And in the back of my mind, I pictured Coach Cooper sitting by himself in a room, with a single light bulb hanging by a thread, with a bottle of bourbon on the table, repeatedly asking, “How could you do in your first try what I could never do in thirteen years?”.
Jim Davidson
(We asked Jim to send us somewhere around 200 words. He chose the 1,000 words below instead.) 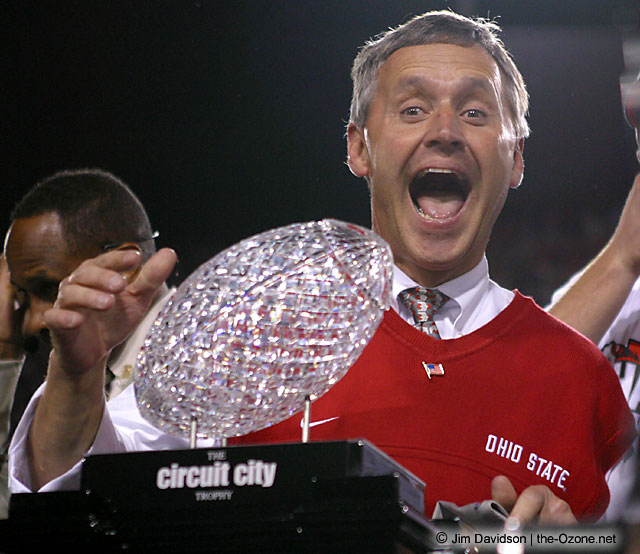