It was a very eventful week for the Ohio State football program, which saw Mike Weber, Parris Campbell, Johnnie Dixon, and Dre’Mont Jones all announce that they would return for the 2018 season.

The news wasn’t all good. LB Jerome Baker decided to leave for the NFL Draft and backup OL Kevin Feder announced that he would transfer.

All of those moves impact the Buckeyes’ scholarship numbers for the fall, which means that the good news of players returning is also bad news for a program that is tight on roster spots and vice versa.

Every FBS team can have a maximum of 85 players on scholarship at the start of the season, and right now the Buckeyes stand at… (drumroll)… exactly 85 scholarship players. So what’s the problem?

Well, for one thing OSU is widely considered the favorite to land a top-100 DT recruit at some point in the next day or so. If he picks the Buckeyes, he would put them at 86 scholarship players. Ohio State is pursuing several other recruits, including 4-star DE Javontae Jean-Baptiste and 4-star OT Rasheed Walker, both of whom are scheduled to visit Columbus over the weekend of January 19th.

The coaching staff would presumably love to add a second OT to this class, along with another edge rusher. If they do, that would put them a few spots over the scholarship limit. We’ll have a better idea where the numbers stand after the deadline to file for the NFL Draft on Monday, January 15, and then again when new recruits officially join the program on Signing Day. That’s Wednesday, February 7 this year.

The numbers will work themselves out by the start of the season as they always do. But that means that for every piece of good news about a new recruit, a piece of bad news like an early NFL departure, transfer or medical hardship retirement will have to follow.

An updated scholarship chart is below. Players are listed by their eligibility in the fall of 2018.

Note: Please don’t speculate on potential transfer or medical hardship candidates in the comments or on the forum. That’s not fair to the student-athletes involved. 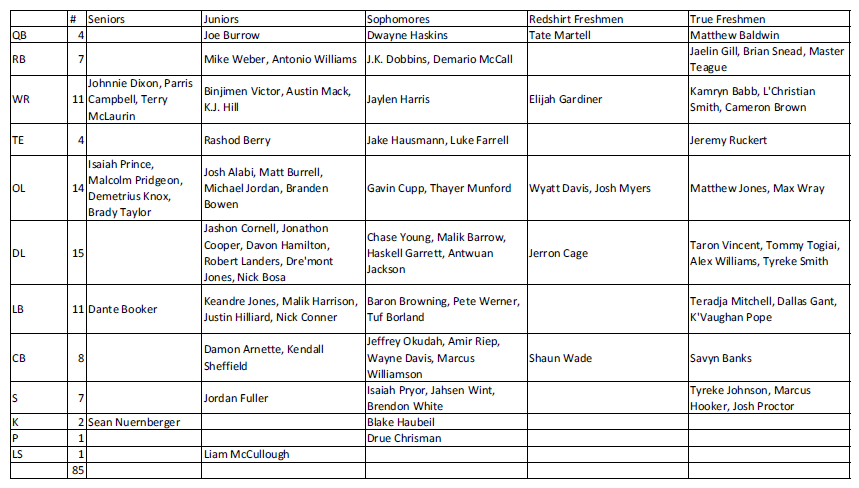