We’ve established that projecting football things in the summer is a good way to pass the time until the games begin (Examples here, here, here, and here).

In addition, I’m not above thievery on this website. Brandon had a promising idea, predicting offensive stats, so I’m flat out stealing it and simply moving it to the other side of the ball.

While the offense may get most of the glory, we all know that defense wins championships. Or, at the very least, having a very good defense improves your odds of winning a championship.

The Buckeyes have a lot of strengths on the defensive side of the ball going into 2018, but also a good deal of question marks.

Can they, once again, replace multiple players that left for the NFL? Five defensive players, including three linemen, were drafted in the first four rounds of this year’s NFL Draft.

Will the Bucks be able to overcome an injury to Tuf Borland and break in three new starting linebackers in the center of the D?

With Kerry Coombs gone to the Tennessee Titans, will the secondary take a step back or continue popping out NFL first-rounders?

Here are my answers to some of those questions, in the form of a brief write-up and a stab at nailing the exact defensive stats for the upcoming season.

This is Ohio State’s bread and butter going into the 2018 season. The defensive line, despite losing three players to the NFL, might just be better than it was in 2017.

Nick Bosa is an animal (technically, a little bear). He’s the returning Big Ten Defensive Lineman of the Year despite not “officially” being a sole starter last year, as he shared significant time with Tyquan Lewis. Opposite him is the player, not named Borland, that I’m most excited to see in 2018 — Chase Young. Though we just got a very small taste of what he could do on the field, he still ended up fifth on the team in sacks.

Spelling Bosa and Young will likely be Jonathon Cooper and Jashon Cornell, both of whom would likely be sure-fire starters on 90% of the other defensive lines in the NCAA this season. Cooper’s lean frame allows him to be a deadly pass rush option off of the end. In contrast, Cornell’s larger size and skill set should overpower many tackles in the conference.

In the middle, perhaps the best interior defensive lineman in the nation is back. Dre’Mont Jones opted to continue his OSU career instead of heading to the NFL early. His athleticism is second to none and combining his presence with Bosa and Young on the outside seems like it should be illegal. 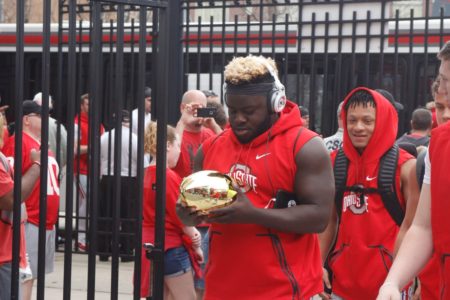 Rob Landers rounds out the most likely starting defensive line. The spark plug nose tackle, he can occasionally be found passing out Gushers before games (shown in the photo above). Landers has energy that doesn’t quit and a knack for being faster off the snap than anyone else. He’ll obviously benefit from the talent around him, but let’s not pretend that Landers is a slouch. He can eat up the middle to stop the run, allowing his linemates the freedom to get after the ball.

Behind them, there is an abundance of recruited (and transfer) talent waiting in the wings for their shot to make an impact. Davon Hamilton, Antwuan Jackson, Tommy Togiai, Haskell Garrett, and others will look to rotate in the middle and keep this highly-touted line as fresh as possible.

I’ve made no secret of the absolute joy that I take in having a fellow Borland on this team. His achilles injury will likely sideline him at least until September, and then he’ll have to work his way up to game speed. If OSU hadn’t been on a tear in recruiting for the past, oh, I don’t know, dozen years, Tuf might be able to jump back into the lineup immediately. However, he’ll have to surpass both Baron Browning and Justin Hilliard to get onto the field, which will be no small task.

I still can’t say who I think will start the season at Mike Linebacker for the Bucks, but my gut tells me that the uber-talented sophomore Baron Browning will see the field first in Borland’s absence. I expect there to be a rotation between him and Hilliard, with Borland eventually joining the mix. If nobody stands out above the rest, we may see an interesting time share this season, knocking down the individual stat totals a bit.

The Sam and Will Linebackers will keep the mold of those that have come in recent years. I look for Malik Harrison and Keandre Jones, respectively, to claim these roles this fall. Their speed and agility, combined with Alex Grinch’s aggressive style, should allow for some big plays in 2018. Behind Harrison, Dante Booker will see the field, as will Pete Werner behind Jones. If his play at the Will spot is anything like the special teams show he put on in 2017, Werner might make a few highlight reels in the near future.

Arguably the biggest question mark on the defense is the secondary. Long-time assistant, Kerry Coombs has moved on to the NFL. Taver Johnson is back at OSU to coach the corners, with Alex Grinch in charge of the safeties. The Buckeyes return starters in Kendall Sheffield and Damon Arnette (split duties in 2017) and Jordan Fuller. They lost their best player, Denzel Ward, and most experienced safety, Damon Webb, to the NFL Draft.

As with each other position group, there is an abundance of talent and ability in the secondary. It will simply be a matter of getting the best players onto the field. Isaiah Pryor seems to be the next safety (Boundary) in line, taking Fuller’s position from 2017, as Fuller slides to the Falcon role (vacated by Webb). It will be interesting to see if Jeffrey Okudah, will overtake Arnette at the corner spot opposite Sheffield. Okudah saw a good amount of time in 2017, and had flashes of brilliance. Currently, I project Okudah and Sheffield to start at the corners, with Arnette taking the Nickelback spot.

The Buckeyes’ secondary has loaded the NFL with draft picks over the last few seasons, and I don’t anticipate that coming to a halt anytime soon. With new leadership, it will be interesting to see how the defensive backfield approaches this season. An aggressive style of playcalling could lead to some noticeable mistakes but a jump in takeaways.

*I based my statistical predictions on the past four seasons’ breakdowns, and only went as far down as double-digit tackles. I love predictions, but not enough to tell you which third-team player might get a couple of stops against Tulane. In a similar vein, I opted against half sacks and half tackles for loss. This way I can claim a victory with my projection of 2 when that player gets anywhere from 1.5 to 2.5.* 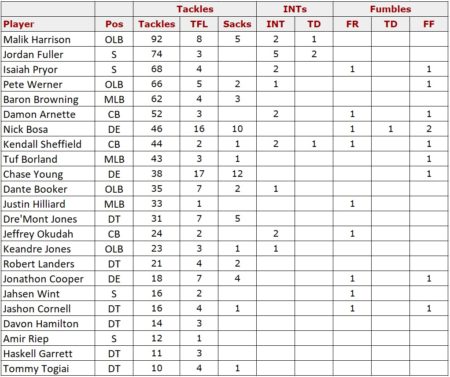 And there you have it. My projected defensive stats for the Silver Bullets in the 2018 season.

EDIT: Numbers updated with the 8/27 announcement that Pete Werner would be a starting linebacker.

Lots of wealth shared among the linebackers, some defensive tackle depth, Jordan Fuller with a few takeaways, and a new school record for sacks <eyes emoji>.