There are no major changes in the Ohio State football depth chart from last week, but that doesn’t mean there aren’t going to be changes where it actually matters.

Fourth-year junior nose tackle Robert Landers sat out last week’s game against Tulane for precautionary measures, but will play this week according to Urban Meyer. Meyer also confirmed on Monday that fourth-year junior running back Mike Weber will be back against Penn State as well.

Weber was removed from the Tulane game following a tackle out of bounds with what was deemed a foot strain. It appeared on the sidelines that Weber could have gone back into the game had there been a need for it.

In Weber’s absence — and due to the continuing suspension of freshman running back Brian Snead, redshirt sophomore Demario McCall received quite a few snaps at tailback last week.

McCall rushed for 26 yards and caught a pair of passes for 36 yards against Tulane. He is only listed on the depth chart as the starting kick and punt returner, but it was good to see him back on offense again. As the team’s fourth H-back and possibly third running back this week, there may not be a spot for him on offense against Penn State.

If he is needed, however, at least he provides the Buckeyes a more veteran presence than either of the two freshman tailbacks.

Defensively, there was a thought that maybe there could be some changes at linebacker after a quiet performance from the three Buckeyes starters last week, but that is not going to be the case — at least according to the depth chart.

Pete Werner, Malik Harrison, and Tuf Borland are all still listed as starters, which shouldn’t be much of a surprise given that they have been there all season long. (Borland has been there once he finally got fully integrated into the defense the past few weeks.)

All three will be playing more than the one half of football they played last week, so their production will definitely increase this week. Behind them, the Buckeyes are perhaps finding guys who deserve some reps in a possible rotation. Fifth-year senior Sam linebacker Dante Booker was OSU’s defensive player of the game last week, and sophomore Baron Browning had his best game as a Buckeye with a sack and another tackle for loss.

The goal all along has been to find packages for the linebackers to excel in. Perhaps that is happening now. And perhaps once it is finished happening, the Buckeyes can figure out how to stop giving up long runs against average opponents.

Redshirt freshman Shaun Wade is still listed as Kendall Sheffield’s backup at cornerback despite having moved to the safety room. Wade is the team’s No. 1 nickel back and even though he has been talked about as a possibility at strong safety, it wouldn’t appear that that is going to happen this week. At least not initially.

Interestingly, in the second half of last week’s game, rather than get some experience at safety, Wade was back working at cornerback.

Defensively, everything is going to have to come together for the Buckeyes this week against perhaps the best offense they will face this season. Penn State currently leads the nation in scoring, averaging 55.5 points per game, which is one point better than the Buckeyes, who are No. 2. 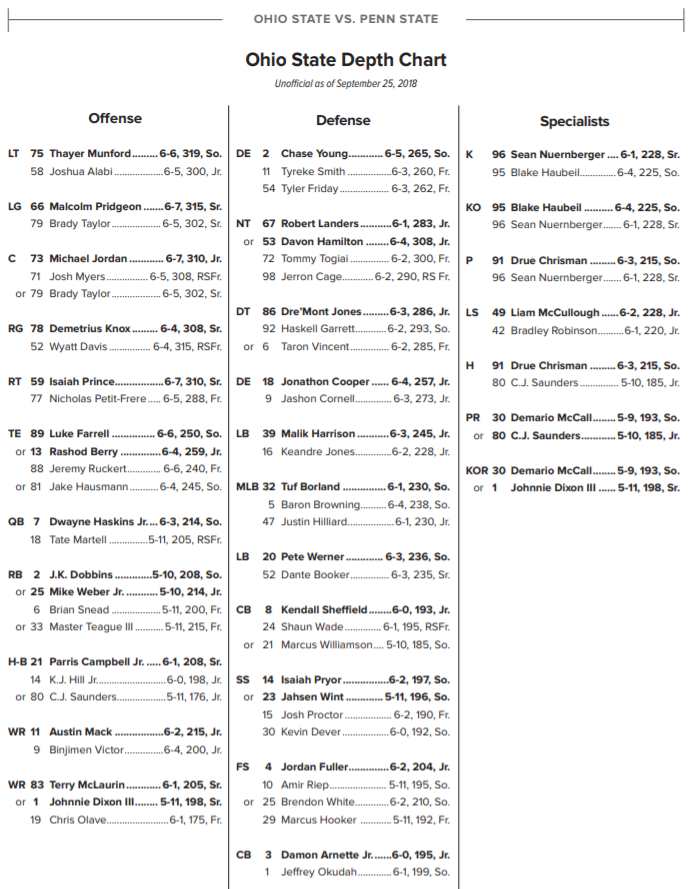