On Monday, Urban Meyer announced that Bosa would miss the Tulane game, but would be evaluated this week to determine how long he might be out. He is still being evaluated and more will be known Wednesday or Thursday.

In his place this week on the depth chart is sophomore Chase Young, who will get his first career start as a Buckeye. Expect fourth-year junior Jashon Cornell to play quite a bit as well, just as he did against TCU.

With this being a lesser opponent, more will also be seen from freshmen Tyreke Smith and Tyler Friday. In fact, those two may play the entire second half as Larry Johnson won’t want to put too much strain on Young and Jonathon Cooper this week with Penn State coming up next week.

The other major change on the depth chart for the defense is redshirt sophomore Tuf Borland back as the starter at middle linebacker.

Borland was back in the starting lineup last week for the Buckeyes and now he is officially back on top of the depth chart.

Against TCU, Borland had a season-high five tackles. He may only play one half against Tulane, but this is a pretty good sign that he is about as close to 100% as many can get.

Following the game on Accost the Field, I said now would be the time to move Shaun Wade completely to safety and let him get a crack at strong safety against Tulane so that he’d be ready to go against Penn State.

While Wade has been moved to the safety room, Jordan Fuller told me that Wade is still only working as a nickel back. That may change moving forward, but as of Tuesday, it looks like Isaiah Pryor and Jahsen Wint opposite Fuller still.

While it’s not necessarily a change on the depth chart, freshman running back Brian Snead returned to practice on Tuesday after missing the TCU game for disciplinary reasons. Expect both he and fellow freshman Master Teague to get plenty of action this Saturday against Tulane.

There was concern about Mike Weber Saturday night prior to kickoff because he wasn’t initially warming up with the rest of the team. It caused speculation that he may not be healthy enough to play. He did play, however, and carried the ball 18 times for 64 yards.

Tuesday afternoon, Urban Meyer said on the Big Ten teleconference that there were no other major injuries other than Nick Bosa. He mentioned Robert Landers was probable, but that was it.

Following practice Tuesday evening, however, Weber was seen walking with a team doctor.

Running back Mike Weber walked through the indoor practice facility next to a team doctor just now. Weber appeared to have a slight limp. pic.twitter.com/eNlzhe6nUp 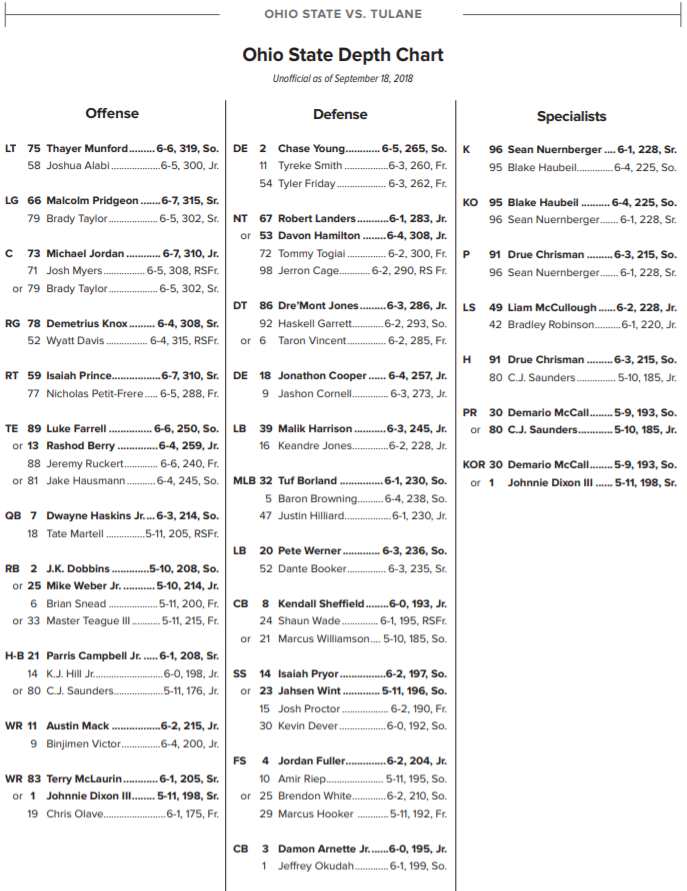