OSU was led in scoring by sophomore center Kaleb Wesson, who put a game-high 18 on the board. Half of his points came from behind the three-point line, where he was 3-of-4 on the afternoon.

It wasn’t all perimeter-oriented for Wesson, however, as he was a force down low that South Carolina State could not contend with. So much so, in fact, that the Buckeye big man was fouled 12 times in the game.

Wesson’s brother Andre added 11 points and six rebounds in his 22 minutes of play.

Ohio State opened an early 5-0 lead thanks to a pair of free throws by Kaleb Wesson followed by the big man hitting his first of three threes on the day.

Wesson’s second of the three made it 17-8 and basically sent the Buckeyes on their way to the blowout win.

Washington followed Wesson’s second three-pointer with his only three of the day, and then came down the court the next possession and drove into the lane, switching to his left hand after he left the floor and laid the ball in while getting fouled. He missed the free throw, but it was still a highlight play from a rookie who continues to have highlight moments.

With 8:28 remaining in the first half, Muhammad found junior forward Andre Wesson open under the basket for a dunk. On South Carolina State’s ensuing possession, Muhammad jumped a passing lane for a steal and his layup attempt rolled off the rim, but sophomore guard Musa Jallow was there to dunk it home on the putback, giving Ohio State a 30-12 lead.

Muhammad then capped his three-possession tear with a trifecta with 6:15 left in the half.

Jallow, meanwhile, led the team with a +25 mark on the plus/minus scale. He only scored six points, but added seven rebounds, three assists, two blocks, and impressive individual defense.

South Carolina State cut the lead down to 15 in the first half, but the Buckeyes came right back with a pair of free throws by Andre Wesson and yet another three-pointer from his younger brother. Sophomore forward Kyle Young ended the half on a dunk to give Ohio State a 43-21 lead.

The second half of the game saw the Buckeyes maintaining a comfortable lead in the low 20s, never really being pressured.

That doesn’t mean there weren’t some exciting moments, however.

With 7:40 remaining, Jallow stuffed a drive attempt from SCSU’s leading scorer Damani Applewhite, which was then turned into a fastbreak that saw Muhammad throw an alley oop to Washington.

The throw forced Washington to catch the ball behind his head, but he was able to control it and drop it in. It wasn’t a clean dunk, but it still counted for two points. To make matters even better for the Buckeyes, Washington was fouled on the play and converted the free throw to give OSU its biggest lead of the game at 70-40.

Three minutes later, Muhammad found himself diving for a loose ball on Ohio State’s side of the court. Darting around like a mongoose, he was on the ground scrambling for possession before firing the ball to Jaedon LeDee under the basket for a dunk to make it 80-47.

South Carolina State closed on a respectable 14-9 run, but it was way too little and way too late.

Kaleb Wesson was the focal point early for the Ohio State offense because head coach Chris Holtmann knew that South Carolina State would have no answers for him. After the game, SCSU head coach Murray Garvin said he’s never seen a single player draw 12 fouls before. He compared Wesson’s impact in this game to that of Shaquille O’Neal back in the ’90s. Garvin also talked about how difficult it was to defend Wesson because of his ability to dominate inside, but then also hit the perimeter shot.

+ Garvin had a lot of good things to say about the Buckeyes in an entertaining postgame press conference, which you should check out.

+ Keyshawn Woods was dealing with a little bit of a stomach bug, which helps to explain him playing just 14:28 on the day. Woods only attempted two shots, but that’s also because he knew he didn’t have to be a scorer in this game. His feel for what the team needs from him on any given night may be the best part about him. The ability to then deliver those needs on most nights isn’t bad either.

+ Duane Washington and Luther Muhammad are going to be very good. They’re already pretty good, and they are only going to get better. They are an entertaining backcourt to watch and they are even better to watch in person. If you haven’t been to a game in a while because maybe the team hasn’t been entertaining enough for you to watch over the last few years, give these guys a chance and see if they can’t convince you that you need to spend a few more nights in the VCA. 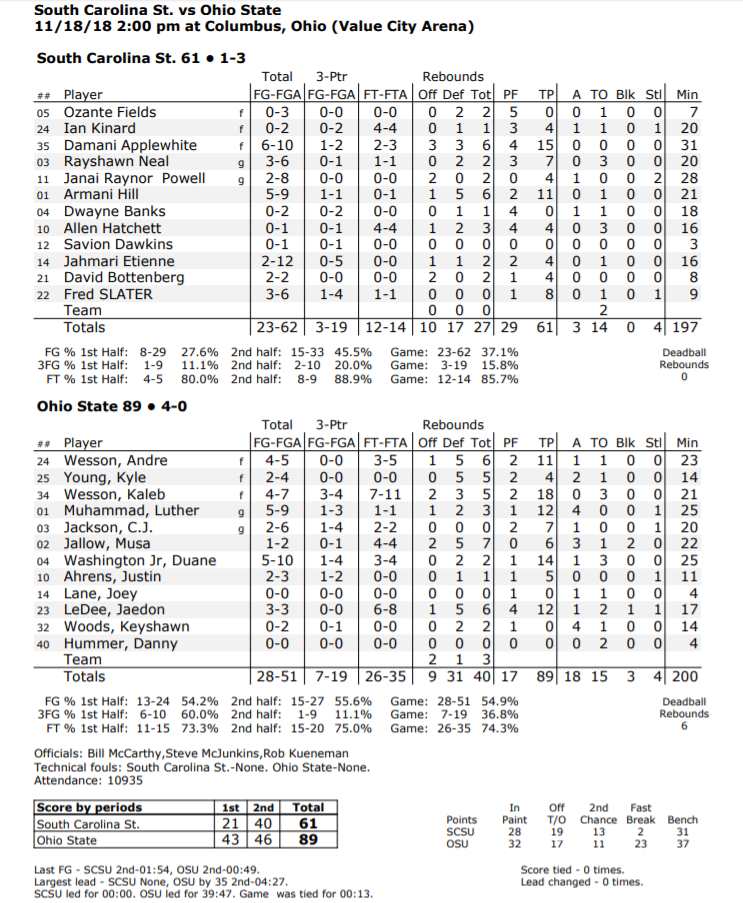