Muhammad hit three clutch three-pointers in the second half, including one that bounced around like a journeyman reliever before falling in.

Muhammad had some help on the day, as the Buckeyes’ stifling defense held Nebraska to just 21-of-58 shooting (.364). A surprise zone defense from Ohio State limited the Huskers in the second half and kept them from finding a workable groove over the final 20 minutes.

The Buckeyes put the first points on the board with a jumper from center Kaleb Wesson, but Nebraska answered with an immediate 8-0 run to ignite a raucous Husker crowd. Consecutive layups by Andre Wesson, Musa Jallow, and Muhammad recaptured the lead, but lost it just as quickly and the Huskers would lead for the next 10 minutes of action.

A layup by senior guard Keyshawn Woods gave OSU a 23-22 lead with 5:22 to play in the first half. Their next three possessions also featured made layups, which sent the Buckeyes to the half with a 29-24 lead.

Isaac Copeland opened the second half with a three-pointer for Nebraska, and over the next four minutes the lead switched back and forth with no team leading by more than one possession.

That changed with a second-chance jumper by Muhammad. Kaleb Wesson added a layup to make it a 6-point lead for the Buckeyes.

Things got interesting a few moments later. With the Buckeyes leading 44-40 with 11:22 to play, Kaleb Wesson was whistled for a “Flagrant-1” foul when he dragged down Nebraska big man Tanner Borchardt.

This could have been the turning point in the game. Instead, Borchardt only made one of his free throws and then Wesson immediately answered with a three-pointer to give OSU a 47-41 lead. Muhammad hit three-pointers on the Buckeyes’ next two possessions, and CJ Jackson dropped one in to give OSU a 56-43 lead with under eight minutes to play.

Nebraska cut the lead to seven points, but Muhammad stopped the bleeding with a desperation three from the top of the key to make it a 10-point game with 4:44 remaining. The Huskers could get no closer than six points the rest of the game.

Ohio State out-rebounded Nebraska 45-31 and outscored them in second-chance points 14-2.

Luther Muhammad played up to his considerable potential offensively on Saturday, hitting 7-of-12 shots from the field and 3-of-4 from three-point territory. He also added six rebounds and three steals. His +13 in plus/minus was the second-highest on the team (Keyshawn Woods +15).

+ Sophomore guard Musa Jallow made his second start of the year and gave the Buckeyes a defensive spark. He added four rebounds and hit one of his two three-point attempts.

+ Kaleb Wesson was quiet on the scoring end once again with just seven points on 3-of-8 shooting, but he did grab 11 rebounds. He dealt with foul trouble in the second half, but for the second game in a row the ball moved well without him and the Buckeyes began hitting shots. 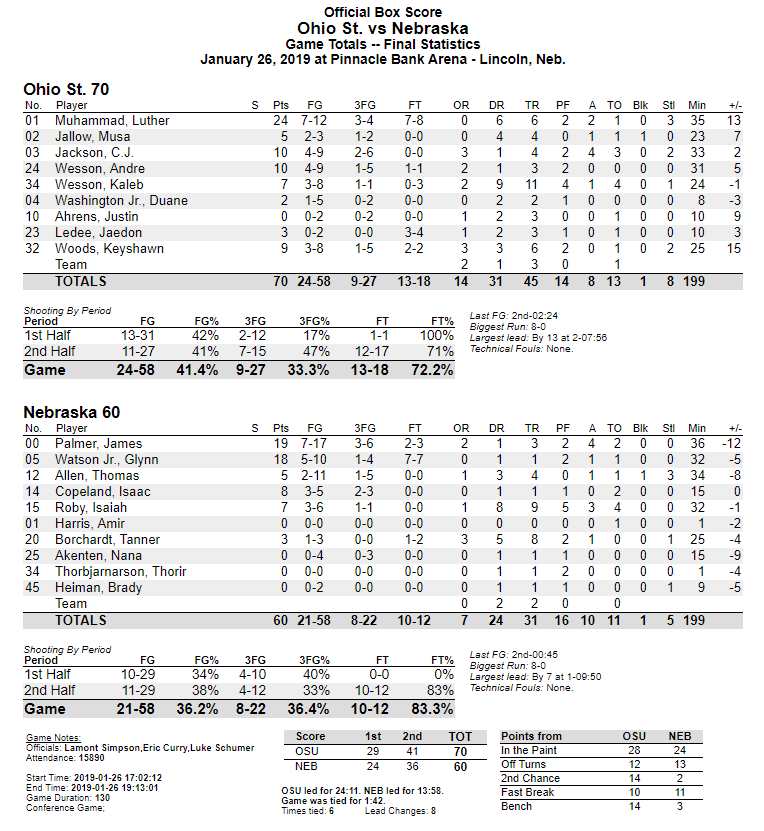