July 12, 2011 | This story comes from Brandon Castel and details the reasoning why 5-star Cleveland offensive lineman Kyle Kalis decommitted from Ohio State in the summer of 2011 and instead decided to commit — and eventually sign — with the University of Michigan. Long story short, Kalis didn’t want to jump onto a sinking ship. — TG


Kyle Kalis was ready to end his commitment to Ohio State in the days following Jim Tressel’s resignation (now retirement) before a phone call with new head coach Luke Fickell.

One of the top offensive linemen in the country for the class of 2012, Kalis had been committed to OSU since last September, but recent events had begun to shake his confidence that the Buckeyes could survive the turmoil surrounding their university.

The conversation with Fickell quelled his fears about the future at Ohio State, but only for a short while. Less than a month after Fickell took over for Tressel, Kalis announced his de-commitment, but not without another phone call.

“When I de-committed to Luke Fickell I called him and told him and he understood where I’m coming from,” the Cleveland-area lineman told ESPN.com recently.

“With the turmoil and uncertainty I just couldn’t.”

A 6-foot-5, 300-pound tackle from Lakewood St. Edward, Kalis was easily Ohio State’s most highly-rated prospect in the class of 2012. He helped the Eagles defeat Huber Heights Wayne star quarterback Braxton Miller in the Division I state championship game.

Though he grew up in Cleveland rooting for Ohio State, his family ties are all over the country. His dad, Todd Kalis, played seven seasons in the NFL as an offensive lineman with the Minnesota Vikings, Pittsburgh Steelers and Cincinnati Bengals. He was born in Minnesota, but grew up in Phoenix before attending Arizona State University.

His son Kyle always thought he would be a Buckeye, but he does not want to play his college career under the cloud of NCAA sanctions.

“I can’t go (to Ohio State) and take penalties for something I never did,” Kyle Kalis told ESPN. 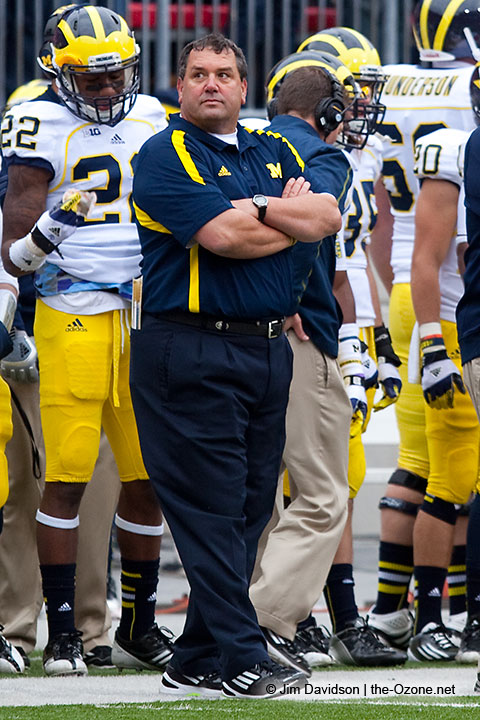 “Ohio State is a great program. I’m just not sure how long it will take them to recover. I want a solid, grounded coaching staff with a safe environment where there aren’t such tough questions.”

That certainly would not have been Michigan a year ago, but new Head Coach Brady Hoke has apparently done a masterful job persuading Kalis to leave his home state despite heavy pressure from the community.

“He is the type of guy I want to play for,” Kalis said.

“He has an incredible amount of passion.”