Thus far, our statistical projections have touched on a little over a dozen Buckeye players.

We were able to pinpoint exactly who would catch the ball this season for the hometown team. To do so, a complex algorithm was created and utilized. The system is based on hundreds of factors, churns out millions of reports, and predicts stats for the entire OSU roster.

From there, we determine the projections that occur most often and nail them down into an elaborate spreadsheet (shown below). Finally, in posting this, we allow the general public access to this nearly flawless information about future events.

Obviously, this is a lie. In truth, I spend too much time looking at depth charts and reading conflicting stories about who’s had a better camp than whoever else. Then, I fall victim to the most recent hype train and make my predictions accordingly.

For the next adventure in “projecting way too many things that could easily change due to a countless number of variables”… let’s talk running backs.

With Mike Weber off to the NFL (having been drafted, unlike Karan Higdon), J.K. Dobbins now has the starting running back gig locked down. Dobbins’ production dipped in 2018 from his outstanding freshman campaign, though he still had over 1,300 yards from scrimmage.

The diminutive back (5’10” according to the official roster, a measurement that had to have been taken mid-jump) is a strong runner between the tackles. However, he also has the ability to bounce outside and elude at the next level. His nasty jump cut will have claimed more ankles than Allen Iverson’s crossover by season’s end.

With no concern about his lead role in the offense this season, and with added maturity, I expect big things from Dobbins. The Texas HS running back burst onto the scene in 2017, filling in for an injured Weber. At his current pace, he should cruise past some big-time OSU names in the rushing record books this fall. With each game that Dobbins sets foot on the field, he’ll pass names like Otis, Wiley, Pearson, Hyde, Byars, Wells, etc.

Given my prediction below, he’ll cruise into second place on the all-time Ohio State rushing yards list at some point in the fourth quarter of OSU’s bowl game this year. Give him a 15th game, and he’ll give himself a nice little cushion over Zeke. Should he return for his senior season, he’d be in line for a run at the G.O.A.T (that’s Archie, in case you’d forgotten).

On top of all of that, Dobbins is a weapon in the passing game and will serve as another check-down security blanket for Justin Fields. In fact, I have Dobbins checking in with the third most receptions on the team, falling short of only K.J. Hill and Austin Mack.

As with the wide receivers, there is a lot of competition for backfield snaps within the running back group. Apparently that’s what happens when you consistently recruit the heck out of the skill positions (all positions, truthfully) and then go the extra step in coaching them at the highest level imaginable.

My pick for the second most rushes on the team (barely, but we’ll get to that later in the week) goes to the speedster, Demario McCall. Go with your own theories if you’d like, but I’m on the McCall train until the wheels fall off.

McCall will be the first onto the field to spell Dobbins and will see a good amount of work throughout the season. He may struggle occasionally between the tackles, but will make up for that with his agility and big play capabilities. He’ll also thrive in the passing game, turning a few screens and dump passes into big yardage. 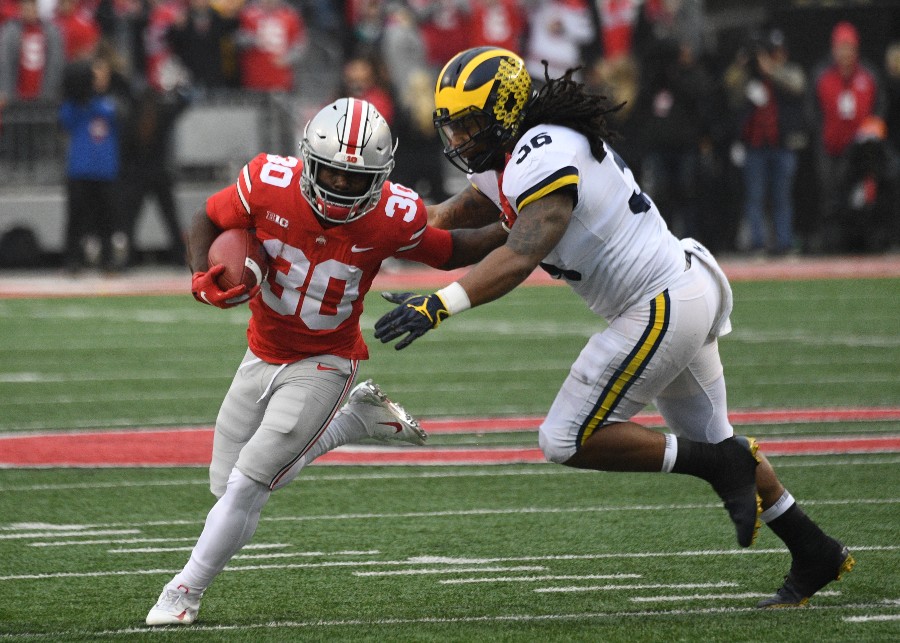 If you weren’t sure about the backup spot, then prepare to see the position get even cloudier here. Receiving the additional running back snaps will likely be a combination of Master Teague, Marcus Crowley, and Steele Chambers. How those chips fall is anyone’s guess. How those chips fall within the boundaries of this article, however, is my guess alone, and here it is.

Master Teague‘s production in 2018 and understanding of Ryan Day’s offensive system puts him firmly into the third spot. Teague averaged the most yards-per-carry of anyone on the team not named Demario last year. Sure, it was always late in the game, but it also came behind second and third-string offensive linemen.

MTIII runs with a high pad level, reminiscent of Eddie George, and is perhaps the most physically gifted of the bunch. I predict just a small step forward for Teague this year. But, I would also not be surprised to see him push McCall for playing time as the season progresses.

True freshmen Marcus Crowley and Steele Chambers are the wild cards this year, as both have impressed in camp. I give Crowley a leg up on Chambers, if for no other reason than he’s been on campus longer, enrolling early in the winter. Both, as is noted in the linked write-ups, appear to have great vision. Similarly, both freshmen have enough speed to bust free, but also run violently between the tackles. I’m very excited for the future with these two Buckeye backs and think that Crowley will have a big play or two in just a matter of a couple of weeks.

Running back stats… complete. Mark it down. “Sharpie,” as they say… or at least one of those crossword puzzle pens with an eraser on the end.