C’mon, people. You didn’t think I’d just stop after the QBs and forget all about the most important players on the field, did you?

Kickers and punters are people too. Let’s show them some respect.

*Fast-forward to the 0:41 mark of the video, if you’re impatient*

Ohio State kickers have not missed an extra point since before Donald Trump took office. That’s two full seasons of perfection on PAT snaps, holds, and kicks. Going back through the 2014 season, the Buckeyes have hit 361 of their last 363 extra point attempts.

Blake Haubeil, who was a perfect 37-37 in 2018, will look to keep the current streak alive, as he’ll pick up where he left off last year. Haubeil should step right in as the kickoff specialist and also handle all PATs and field goals this season.

The kicker position could certainly change if Haubeil goes ice cold or suffers an injury. My money, however, is on him having a strong, healthy season and being a very solid part of the Buckeye offense, both in scoring and on kickoffs. 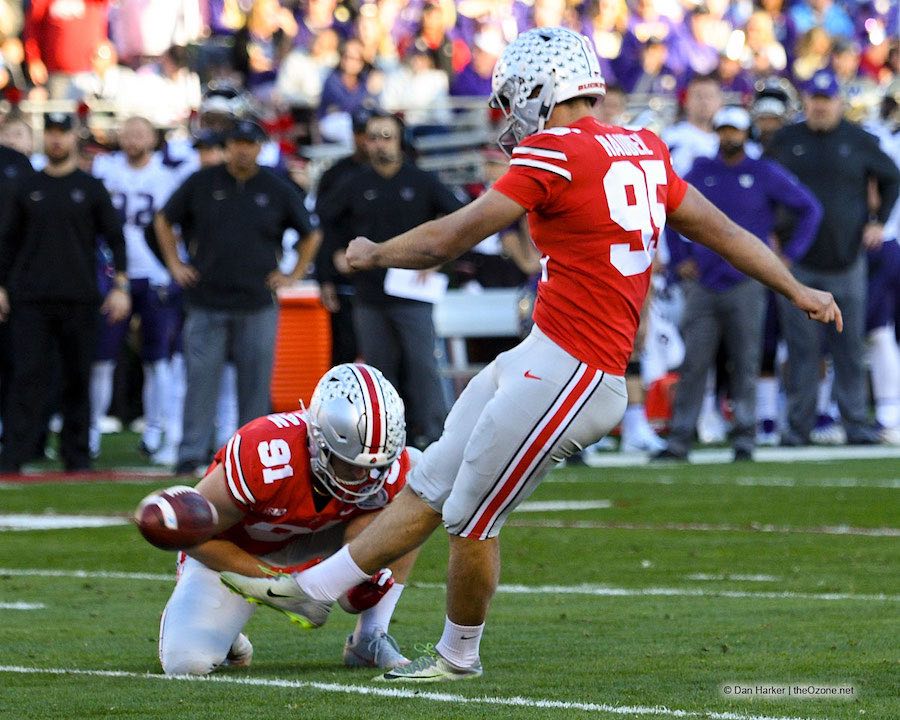 Your favorite bottle-flipping, tricked-out Prius driving, Mormon girlfriend-proposing punter is back again! Drue Chrisman may do all of those other listed things, and quite well, but his true talent lies in blasting a football on fourth downs.

Chrisman booted 61 punts in the 2018 season and only ONE of them resulted in a touchback. That’s remarkable. More impressive than that, though, is the fact that his gross and net punting averages are less than two yards apart after 112 career punts. That means that when he punts the ball, usually 43-44 yards downfield from where it was snapped, that’s where it stays.

He placed almost half of his punts in 2018 inside of the opponent’s 20-yard line, including enough against Michigan State to get his name in the article summary on ESPN.

I could go on and on, and have done so, in fact, but I’ll spare you more punter awe and just say that he will once again be excellent. In addition to his punting duties, Chrisman will again serve as the holder for Haubeil this year, as Liam McCullough long snaps.

See, here’s the thing… there’s not a lot written about starting kickers and punters unless they A) make or miss a crucial kick or B) attempt to break bottle flipping records on YouTube.

Understandably, there is even less written about the fine gentlemen backing up said starters.

Zach Hoover is a transfer from Iowa State and should back up Haubeil in his duties. Similarly, Jake Metzer transferred from Penn State and will do the same for Chrisman.

Penn State’s Collegian noted in 2017 that, “Metzer is the second-ranked transfer punter in college football, according to Kornblue Kicking’s Fab 50 rankings.”

This tells me that OSU and Metzer should be just fine if the need ever arises for him to step in and relieve Chrisman.

It also tells me, that upon Google examination, Brandon Kornblue is a real person and kicker/punter for Michigan in the 90s. Let that sink in for a minute. He went to Michigan. His name is Kornblue. Korn. Blue. I’m absolutely speechless.

On a personal note, I love what this group has become. Sure, I may be tremendously biased towards the special teamers, as a former mediocre HS kicker/punter, but still.

They don’t take themselves too seriously, but they always go out and execute at a very high level and represent the team and University in a fun and positive way. I sincerely hope this tradition of goofy, yet awesome, specialists continues for years to come.

Alright, now we’re really done… you have all of the stats you need for the offense and specialists. Use them wisely.