The statistical projections are back, and there’s nothing worse than trying to pin down the first game numbers.

The team is new.

The QB is a transfer.

The opponent is relatively unknown (read: not in the Big Ten).

Their coach is equal parts hilarious and certifiable, so I have no idea if he’s about to roll out a competitive, innovative game plan that challenges the Buckeyes, or get paid, get whooped, and go home.

For the purpose of this article and the upcoming stat projections, I chose the latter.

OSU has too much talent and will wear down FAU, especially in the run game.

Welcome to Columbus, Mr. Fields. The highly-anticipated debut is finally here and Justin Fields does not disappoint.

Thanks to a well-designed game plan by head coach Ryan Day, Fields gets opportunities to test out his wheels and gain confidence with his arm. He completes a number of easy pitch-and-catch passes with his skilled WRs. Fields and Day will also lean heavily on the run game and the powerful legs of J.K. Dobbins. 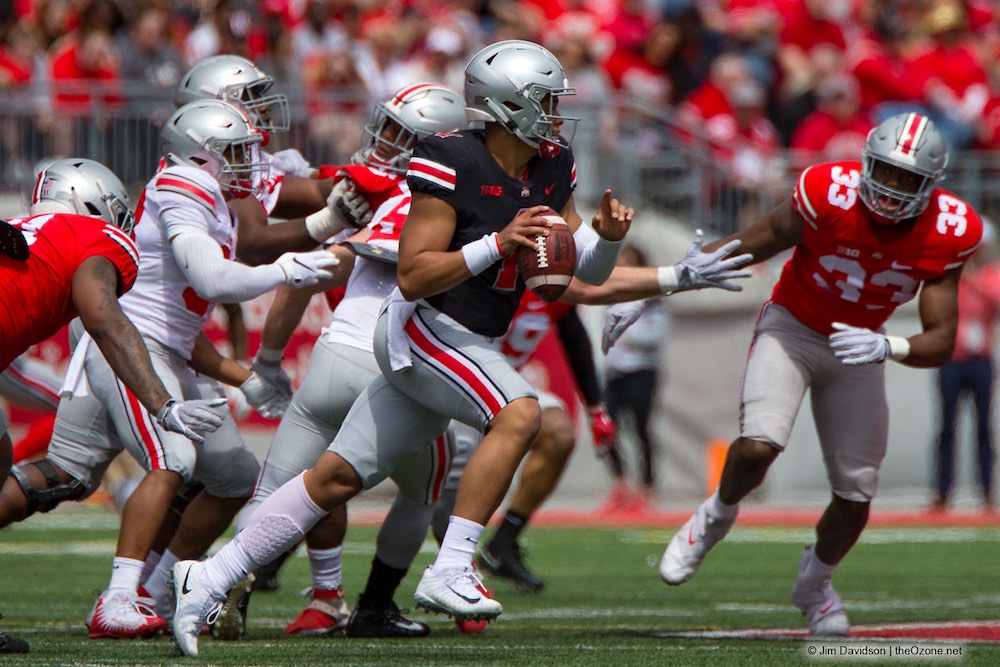 After three quarters of play, Fields departs for the bench with just under 300 yards passing, completes over 80% of his throws, and tosses three TDs. He also gets into the box score with nearly ten yards per carry and another TD on the ground.

In an effort to get some playing time for his other transfer QBs, Day splits the fourth quarter for Gunnar Hoak and Chris Chugunov, allowing them each a few chances to throw the pigskin.

Run, J.K. Dobbins, run. The little back will receive just under half of the total running back carries on Saturday and will make the most of them. The OSU OL will push the FAU DL back on every snap and dictate the flow of the offense. I see Day pounding them early and often before unloading his passing game. Once that’s also successful, Dobbins, Demario McCall and the rest of the RBs will continue plugging away.

I think that we could see up to five different running backs on the field, totaling over 300 yards among them. Of those, Dobbins (2), McCall, and Master Teague will all reach the end zone. Look for a flashy run of at least 15 yards by McCall, as well as a breakaway TD scamper by J.K. The Buckeye backs start off the season very strong in this one against the Owls.

K.J. Hill picks up where he left off last year, leading the team in catches and being an absolute force in the passing game. He’ll dissect the linebackers and secondary as much as Day wants, coming up with several big gains, including a nice TD early on.

From there, Austin Mack and Chris Olave will each snag a few receptions and move the chains for Fields. Binjimen Victor will haul in a big TD with his massive reach, and Luke Farrell will separate from his LB on a redzone play to earn himself six points as well.

Newcomers, Jaelen Gill and Garrett Wilson also get into the action, each bringing in at least one pass for a good gain and a first down.

Blake Haubeil connects on all eight of his PAT attempts and also hits a 40(ish)-yard field goal early in the game.

Drue Chrisman mostly bounces footballs on the sideline… bored… while planning his next bottle-flipping escapade. He’ll punt once, and, as usual, it’ll be far and have no return.

Ryan Day rolls in his first game as the official leader of The Ohio State University.