Ohio State junior defensive end Chase Young is off to a big start in his third season with the program.

Young recorded five tackles and 1.5 sacks in the season-opener against FAU.

He was limited by injuries to both ankles as a sophomore in 2018, but still recorded 10.5 sacks, the 7th-best season in program history.

Young has his eyes set on breaking the Buckeyes’ single-season sack record of 14 (Vernon Gholston, 2007) this fall, and is already off to a big start. The single-game sack record (4.0, by four different players) is worth keeping an eye on as well.

OSU head coach Ryan Day said this week that Young has been an impact player for the Buckeyes, both on and off the field.

Young’s impact on the field, and specifically on the bodies of opposing quarterbacks, is obvious. His ability to influence those around him on the sidelines and in the practice facility is a little more subtle.

Late in Saturday’s win over FAU, after the Owls completed a touchdown drive, Young sought out redshirt freshman defensive end Javontae Jean-Baptiste to share some insights on what he saw on the field. 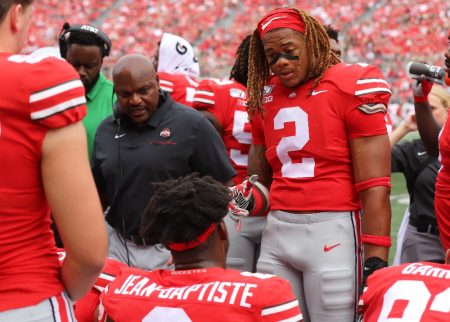 Defensive line coach Larry Johnson was there as well (right), working with the young guys to get them better. But it was immediately clear that Young is more than just the star player on this year’s Buckeye defense. He’s a teacher as well.

“I think his leadership skills have really been outstanding,” said Johnson.

“It’s his third year playing in the system, you learn how to mature, learn how to handle things better. He’s done a great job with that. I thought he played really fast on Saturday, but there is always room for improvement with Chase.”

Young is one of seven players serving as a captain on this year’s team, and Day said his leadership has been obvious in a number of places.

“It’s funny, some guys can be leaders in certain ways, but when you’re strong and in front of the team and play the way he does, that’s the sign of a great leader,” Day said.

The combination of another year in the system, and healthy legs has Young poised to take another big step this fall.

“I feel a lot better than I did last year, a lot more comfortable. I just feel like I’m ready to go,” Young said. “I’m hitting the film room, the weight room. I’m just clicking on all cylinders right now, mentally-wise.”

Young is the latest in a series of defensive ends who came to OSU with 5-star recruiting hype, and who built themselves into early NFL Draft picks.

But both Joey and Nick Bosa also faced the frustration of double, and sometimes even triple-team blocks from opponents.

As a result, Joey Bosa saw his sack numbers drop from 13.5 as a sophomore to just five as a junior.

Nick Bosa was getting similar treatment from opponents before suffering a season-ending injury during his junior year.

Young knows that kind of attention comes with the territory, and says it doesn’t phase him at all.

“I feel like it doesn’t even matter,” Young said.

“Whether they double me, triple me. It’s going to free one of our inside guys up or our end from the other side.”