Wesson made 9 of his 11 field goal attempts, including 3-of-4 from three-point territory.

It was an 11-point outburst in a three-minute span in the middle of the second half where Carton truly announced his OSU arrival. It began with a driving dunk in traffic, then a jumper on the Buckeyes’ next possession, followed by a three-pointer 71 seconds later, and then capped by two more dunks in the span of 13 seconds — with the second being an alley-oop from fellow freshman EJ Liddell.

And all of it off of the Buckeye bench.

After the game, head coach Chris Holtmann remarked that it won’t always be that easy for the freshman from Iowa.

Ohio State scored the first six points of the game, with the first three coming from an Andre Wesson hoop and harm.

Six-foot-3 guard Branden Maughmer got Cedarville on the board with a one-handed dunk that got the many Yellow Jacket fans in attendance on their feet.

At the 15:00 mark of the first half, Chris Holtmann inserted  DJ Carton, freshman forward EJ Liddell, and sophomore guard Duane Washington into the lineup.

The freshmen did as many freshmen do — they relied on the veterans, finding Kaleb Wesson for a pair of baskets to build the OSU lead to four at 16-12.

Carton made it 18-14 with a step-back perimeter jumper. A Carton layup was sandwiched by a pair of Cedarville threes, tying the game at 20-20 with 9:45 to play in the first half.

Cedarville swingman Isaiah Speelman actually gave the Yellow Jackets a 23-22 lead with a three-pointer, but a jumper from Kyle Young and a pair of free throws by Luther Muhammad got things back under control a bit for the Buckeyes.

Kaleb Wesson added a pair of jumpers — including a three-pointer, to build a 31-25 lead. Young added to that with a pair of free throws.

A couple of minutes later, Kaleb Wesson added another three-pointer for the Buckeyes before the halftime score finally settled in at 41-27.

A three-pointer from Muhammad and a layup by starting point guard CJ Walker built the lead up to 17 points early in the second half. Consecutive steals by Walker and another layup then made it 54-33.

Cedarville responded with a 10-0 run, which was right around the point that DJ Carton went off for 11 points in three minutes.

Soon after, Holtmann emptied the bench and the lead grew even more.

Playing in his first game in nearly 600 days, CJ Walker showed some rust, but scored 10 points on 4-of-8 shooting. He finished with two turnovers and zero assists.

Ohio State tips off its season for real next Wednesday night at home against Cincinnati. 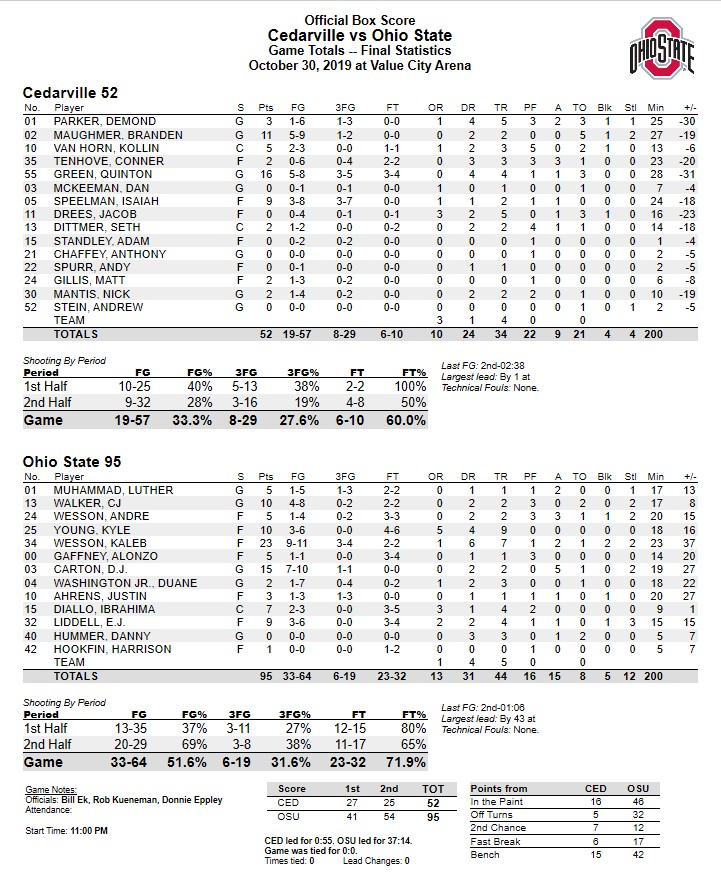