(If you’re getting a case of deja vu, it’s probably because a version of this feature ran last year.)

The toughest team will win on Saturday.

The smartest team will win on Saturday.

The most physical team will win on Saturday.

Coaches love to spout their own theories on how and why their team is going to win the Ohio State vs. Michigan game.

Before the 2018 edition of The Game, Urban Meyer said, “we have a saying around here: The most prepared team will win the game.”

But history has shown that one factor is more likely than any other to decide whether Ohio State or Michigan will win.

Whoever runs the ball better in The Game, will win The Game.

Going back to 2002, the team that has rushed for more yards per carry in The Game has won. Every single time.

Gerd has pointed out that using raw rushing yards instead of yards per carry, the streak is even longer.

The last time Ohio State beat Michigan while being outrushed by the Wolverines was 1994. The team that wins the rushing battle has won the last 18 games.

Yards per rush is just straight-up “which team is running the ball better.” It’s also a pretty good barometer of which team is winning the battle at the line of scrimmage.

Regardless of opponent, if you can do that, you’re probably going to win.

Since 2002, Ohio State has rushed for as many or more yards per carry than Michigan in 14 games. They are 14-0 in those matchups.

Michigan has only outrushed the Buckeyes on a per-carry basis twice: 2003 and 2011. They are 2-0 in those seasons.

Here’s a chart of the average yards per carry for both teams over that span. 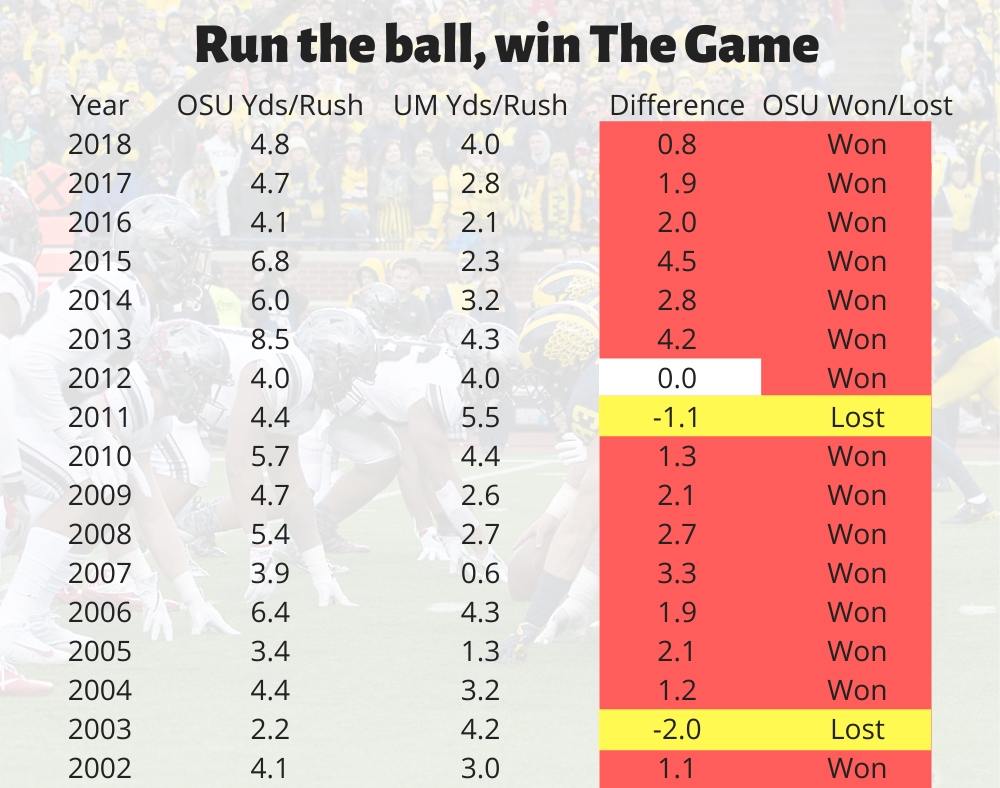 So which team does that favor?

The Buckeyes enter this weekend averaging 5.9 yards per carry, and allowing 2.5 yards per rush.

Michigan enters with an average of 4.0 yards every time they run the ball, and with 2.8 yards per carry allowed.

If you’re a Buckeye fan, those numbers have to look pretty good.

Ohio State is looking to stretch its win streak over Michigan to a school-record eight straight seasons. Can they do it?

Just watch the rushing stats. Odds are, they’ll tell you everything you need to know.