Wade is the only starter listed on the report.

A redshirt sophomore, Wade has found a home as OSU’s slot corner in their three-cornerback starting lineup. He is as capable of handling a quick, slot receiver as he is a big, pass-catching tight end, which he showed last week against Penn State. Wade’s name has even been appearing in the first round of recent mock drafts.

Wade’s presence would be key in this game considering Michigan’s usage of so many different receivers in the slot, including Ronnie Bell and Donovan Peoples-Jones, who have combined for 68 receptions for 962 yards this season. Tight end Nick Eubanks is also an athletic pass catcher for the Wolverines and can provide some matchup issues for opposing defenses.

If Wade cannot go, it will be interesting to see what the Buckeyes do.

Sophomore backups Cameron Brown and Sevyn Banks have both received plenty of reps this season. So much so that they are no longer all that green. Brown actually started for fifth-year senior Damon Arnette at Rutgers. Banks is also no stranger to Michigan, having scored a touchdown following Chris Olave’s punt block last season.

The other question is which of the corners moves inside. Do they go with one of the starters in Jeff Okudah or Arnette, or stick one of the sophomores there, even though those sophomores are more accustomed to playing outside?

Given the pass catchers in the slot and the overall difficulty of the task, if Shaun Wade can’t go, it would be a bit of a surprise if he isn’t replaced by Okudah or Arnette.

The rest of the availability report has the usual names on it.

Everybody else listed on the report is out this week. Those players are: 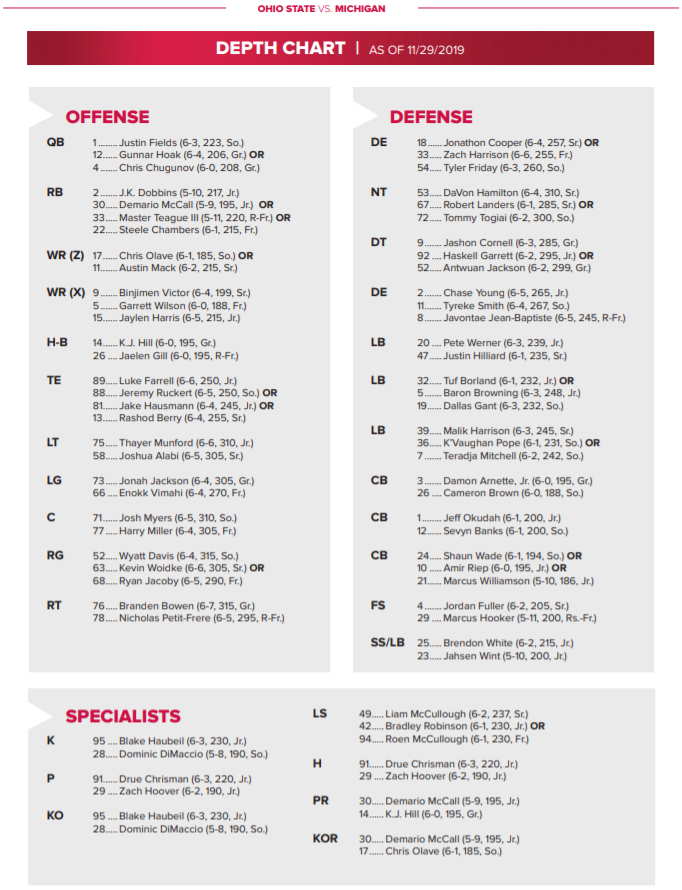