For the first time in five games, the Buckeyes sang Carmen Ohio after the game with smiles on their faces.

Despite being short-handed due to head coach Chris Holtmann suspending sophomore guards Luther Muhammad and Duane Washington earlier in the day, the Buckeyes (12-5, 2-4) shot extremely well and placed six scorers in double figures in an 80-68 win over Nebraska (7-10, 2-4).

Point guard CJ Walker led all scorers with 18 points on 7-of-12 shooting. He also added in five rebounds, four assists, and two steals.

Nebraska actually scored the first four points of the game, but Andre Wesson dropped in a three-point basket in three-consecutive possessions to make it 9-4 with 15:51 to play in the first half.

Shortly thereafter, the Buckeyes went on an 8-0 run via layups from CJ Walker, Kaleb Wesson, EJ Liddell, and DJ Carton, giving Ohio State a 17-7 lead with 11:13 remaining. A three-pointer from Carton three minutes later grew the lead to 24-11.

Three baskets in a row by Kyle Young made it 30-15. That lead eventually then went to 36-22 following a three-pointer from Justin Ahrens with 1:52 to play. Ahrens then hit a desperation 20-footer at the end of the half to give the Buckeyes a 38-25 lead.

Ohio State opened strong in the second half as well, as a pair of three-point plays from Carton and a layup from Kyle Young sandwiched a three-pointer from Husker Haanif Cheatham to make it 46-28 early on.

Three-pointers by Thorir Thorbjarnarson and EJ Liddell canceled each other out, but a couple of minutes later Thorbjarnarson added another three to cut the Ohio State lead to 50-36 with 15:53 to play in the game.

Four minutes later, Thorbjarnarson dropped in another three-pointer to make it 56-43. The Buckeyes then answered that basket with a 12-0 run fueled by eight points and a pair of three-pointers from CJ Walker. Walker’s second three made the score 68-43 with 8:25 remaining.

Nebraska then closed on some hot shooting, as a three-pointer from Jervey Green and two more from Thorbjarnarson made it 76-61 with under three minutes to play. A three-pointer from Kevin Cross cut the lead to a dozen at 78-66 with under a minute to play, but they could get no closer to the Buckeyes.

Up next for the Buckeyes is a trip to Penn State on Saturday at 12:00 pm on ESPNU. Ohio State won the first meeting 106-74 five weeks ago. 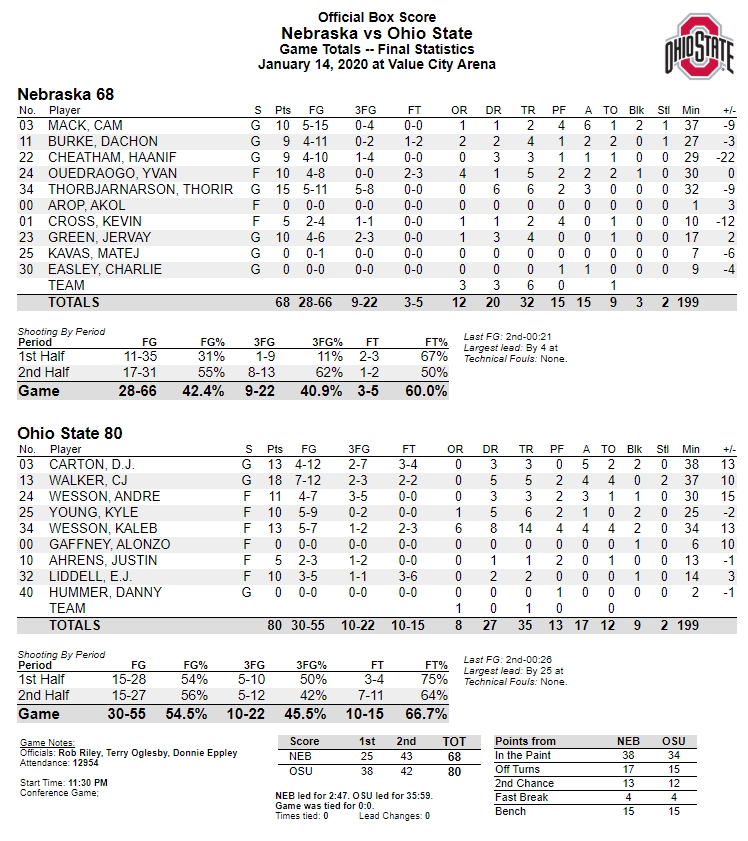