Ohio State moves to 4-0 this season against Top 10 teams.

The Buckeyes put five scorers in double figures and only turned the ball over 10 times. They outrebounded Maryland 36-27, pulling down 13 offensive rebounds in the process.

The start of the game was a contrast of different styles on offense, but two similarly poor styles of defense. The Buckeyes opened with an open three from CJ Walker to get the scoring started. He then dropped in another less than three minutes later. Andre Wesson also sank a wide-open look for three.

Going on at the same time, however, was a Maryland passing offense that kept consistently finding open men on the baseline for layups and dunks. By the time of the first media timeout, Ohio State led 9-8 with 15:46 left in the first half and the Terps were 4-of-5 from the field.

A layup from Duane Washington made it 11-11, but that was quickly erased by a three-pointer from Maryland guard Aaron Wiggins. After a Kaleb Wesson free throw, the Terps’ poor defense returned, allowing open looks for Luther Muhammad and Andre Wesson, which both ended in three-point baskets. The latter gave the Buckeyes an 18-14 lead with 11:45 to play and forced Maryland head coach Mark Turgeon to call a timeout.

Kaleb Wesson — who scored 15 points on the day — stopped the UM run with a jumper to tie it up. Maryland guard Anthony Cowan was fouled on a three the next time down the court and made all three free throw attempts to make it 24-21. Kaleb Wesson hit another jumper, which was then followed by a pair of Andre Wesson free throws to give OSU a 27-24 lead with 5:27 remaining.

Aaron Wiggins tied the game for the Terrapins 21 seconds later. Wiggins led Maryland with 20 points in the contest. Less than a minute later, Kyle Young took a hard fall and had to be helped off the court, limping noticeably. He went to the locker room for further evaluation. On OSU’s ensuing possession, a play was drawn up for Andre Wesson to drain a three, which is exactly what he did, giving the Buckeyes a 30-27 lead with 4:14 to play.

Tied at 30-30 with three minutes to play, Luther Muhammad made three-pointers on consecutive possessions for the Buckeyes, giving them a 36-31 lead. Duane Washington added a pair of free throws, which were then countered by two Anthony Cowan free throws. Washington closed the half on a spinning, driving layup to make it 40-33 at halftime.

Ohio State opened well in the second half, getting a three from Kaleb Wesson. Following an empty possession for the Terps, Andre Wesson hit a turnaround jumper in near the elbow as the shot clock wound down. Maryland forward Jalen Smith missed a layup the next time down. Duane Washington grabbed the rebound and fired it up court to CJ Walker who took it all the way in for a layup, making it 47-33 with 18 minutes to play and forcing a Maryland timeout.

The Terps rebounded with a dunk and layup by Jalen Smith to cut it to 10, but Muhammad answered with his fourth three-pointer of the game to make it 50-37. Smith was held well under his average with just eight points, shooting 3-of-8 from the field.

Eric Ayala and Aaron Wiggins hit consecutive threes to cut the lead to seven, but EJ Liddell then rebounded a Luther Muhammad miss and laid it back in to push the lead back to nine. A little over a minute later, Muhammad converted on a layup to make it 56-45 with under 11 minutes to play.

Ayala immediately answered with a three. Both teams then went scoreless for more than two minutes before Andre Wesson and Darryl Morsell traded baskets, making it 58-50 with 7:08 to play in the game.

Wiggins made it 58-55 with a three, but Kaleb Wesson was able to get the lead back up to five with a dunk on a dish from his brother.

Less than two minutes later, Anthony Cowan made a layup but was then whistled for a technical when he attempted to kick Kaleb Wesson. That was also Cowan’s fifth foul of the game. He left the game with 10 points and seven assists. After Duane Washington sank the technical free throws, the Buckeyes led it 66-59 with 3:54 remaining.

Ohio State got the ball after the technical, but Ayala came away with a steal and a layup off of a bad pass from CJ Walker. The Terps cut it to four points at 68-64 with a three from Wiggins, but the Buckeyes answered back with a jumper from Washington and two free throws by Muhammad.

The Terps would only be able to get it back down to a 4-point game with 30 seconds remaining and never had the ball with the opportunity to tie it down the stretch.

Ohio State made 23-of-28 free throws, with many of those coming down the stretch and keeping Maryland at a distance.

After the game, Buckeye head coach Chris Holtmann said Kyle Young suffered a high ankle sprain, but they were still working on the severity.

Also, regarding the technical foul on Cowan, after the game a statement from official Larry Scirotto indicated that even though there was no contact on the perceived kick, they followed Rule 10, Section 3, Article 1G, which states: “a flagrant, non-contact infraction that involves extreme – sometimes abusive – contact when the ball is dead or alive.” 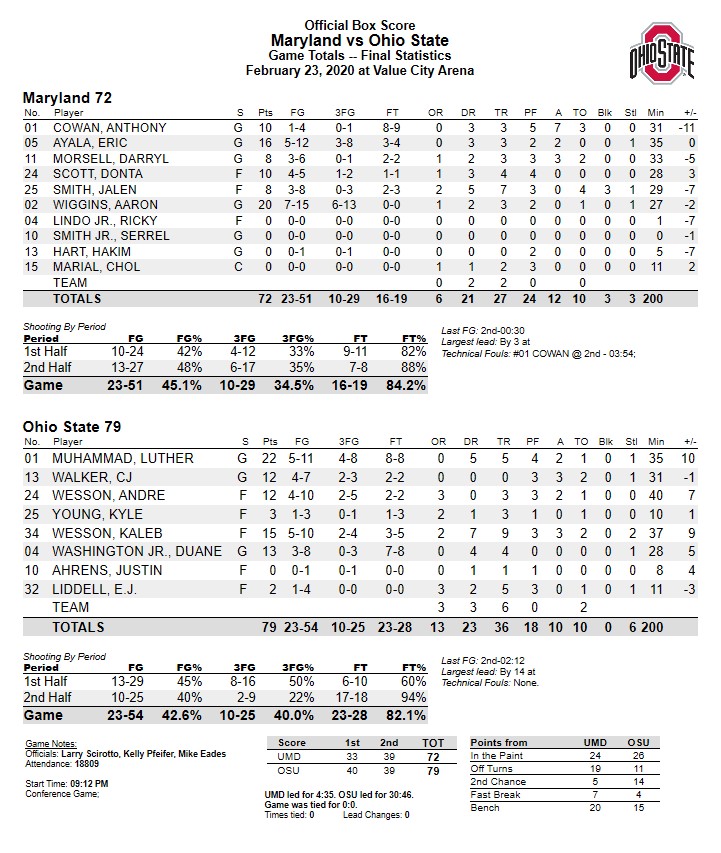