Without freshman point guard DJ Carton being available, much of the ball-handling burden for the Buckeyes was given to CJ Walker, and he responded very well. Walker played 35 minutes, scored 14 points, hit 2-of-5 from three-point land, dished out four assists, and only turned the ball over twice.

Andre Wesson added 10 points and Justin Ahrens threw in 11. Ahrens was 3-of-5 from three-point range. He wasn’t the only one shooting, however.

Over a nine-minute stretch in the second half, the Buckeyes made five of nine three-point attempts to turn an eight-point lead into an 18-point lead. That 18-point lead proved too much for Indiana to overcome.

Kaleb Wesson opened the game with a layup and then a dunk before Indiana finally got on the board with a 5-0 run. Another layup from Wesson gave the Buckeyes the lead back, but IU post player Joey Brunk answered with a dunk the next time down the court to make it 7-6.

On Ohio State’s next possession, Luther Muhammad found CJ Walker for a baseline three-pointer, giving the Buckeyes a 9-7 lead with 15:50 remaining in the first half. Kyle Young added a layup and then EJ Liddell dropped in a smooth turnaround baseline jumper to make it 13-7.

Following some back-and-forth, a baseline cut and layup by Justin Ahrens gave the Buckeyes a 17-9 lead with under 10 minutes to play in the first half. About a minute later, Andre Wesson added a three from the wing, making it 20-10. After a Hoosier turnover, the Buckeyes went down the court and got a layup from Duane Washington, forcing IU head coach Archie Miller to call a timeout with OSU leading 22-10 with 8:55 remaining in the first half.

The timeout led to a three-pointer from Jerome Hunter, but that was immediately answered by a three from Luther Muhammad. Following that make from Muhammad, however, the Buckeyes missed their next eight field goal attempts, but still led 29-19 with under two minutes to play in the first half.

A bucket in the lane from Walker made it 31-19, but the Hoosiers ended the half with a deep three at the buzzer from Devonte Green, cutting Ohio State’s lead to 31-22.

Both teams came out firing in the second half. Kyle Young opened the half with a layup, but that was then answered by a three-pointer from Rob Phinisee and a layup from Trayce Jackson-Davis. Kaleb Wesson followed that with a pair of baskets to make it 37-27. Following a pair of free throws from Justin Smith, three-pointers were traded by Andre Wesson and Justin Hunter to make it 40-32 with under 16 minutes remaining in the game.

A three from Kaleb Wesson extended OSU’s lead to 43-32. Some three minutes later, Phinisee hit a jumper to cut the lead to 45-36, but that basket was answered by a CJ Walker three from the baseline to make it 48-36 with 11:19 to play in the game.

Andre Wesson added a three of his own soon after, but that was followed by a traditional three-point play from Jerome Hunter to make it 51-40. A free throw from Liddell was followed by a baseline three from Ahrens to give the Buckeyes their biggest lead of the game at 55-40 with 8:31 to play. The next time down the court for OSU, Muhammad found Ahrens on the wing for another three, making it 58-40.

Ahrens then did it again, draining a wing three, but that was quickly followed by a three from Devonte Green to make it 61-45 with 5:48 remaining. The lead proved too much as Indiana wouldn’t be able to get the game back into single digits until a three-pointer in the waning seconds.

Ohio State held Indiana without a single second-chance point. The Hoosiers had one offensive rebound in the game’s first 33 minutes and finished with just four total. The Buckeyes out-rebounded IU 31-24.

Ohio State assisted on 19 of their 26 field goals for the game. 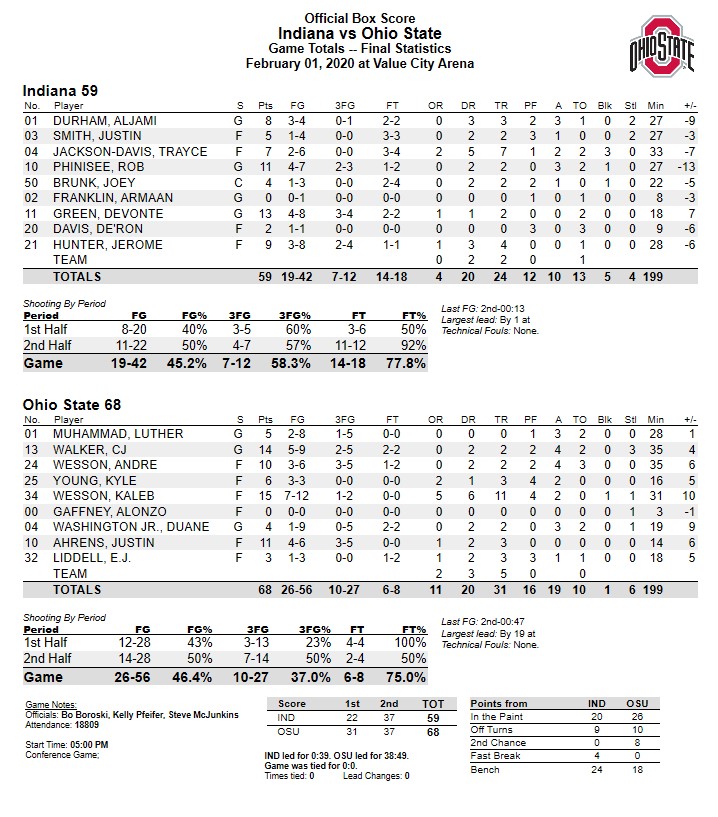