We began our Social Distancing series examining the recruiting of Michigan and Ohio State on Thursday with a broad look overall at the two rosters and the respective rankings of their scholarship players as recruits.

Now we move forward with a more compartmental look, concentrating our focus on distinct areas of the field and how they compare.

To do this, we are pitting the Buckeye quarterbacks, receivers, and offensive tackles against the Wolverine cornerbacks, safeties, and defensive ends.

In the graphic below, the overall ranking of the player is listed first, followed by the respective position rank. These are not in order of who is starting, but rather order of rankings. There are several areas where a much lower-ranked player is actually starting. This can be both a good or a bad thing depending on how good that player is and why he is starting. Neither is really the concern of this particular exercise, however.

Urban Meyer went 7-0 against Michigan at Ohio State’s head coach, but those teams did it with the running game. It wasn’t until his final matchup in 2018 that his Buckeyes actually threw for more than 200 yards against the Wolverines.

Of course, in that game, quarterback Dwayne Haskins more than doubled any previous output under Meyer by throwing for 396 yards and six touchdowns.

Last year, Justin Fields wasn’t quite at that level, but his 302 yards passing and four touchdowns was pretty darn good.

When you look at the OSU passing game as we’re describing it here — QB, WR, OT — there are six composite 5-star players and 12 Top 100 players.

They have one 5-star player and three total Top 100 players. To put it another way, Ohio State has twice the number of 5-star players in the passing game as Michigan has Top 100 guys trying to defend it.

Here’s a look. (Note: Players with a ‘999’ overall ranking or ’99’ position ranking means that they were ranked outside of the top 1,000 players overall or top 100 players at their respective positions.) 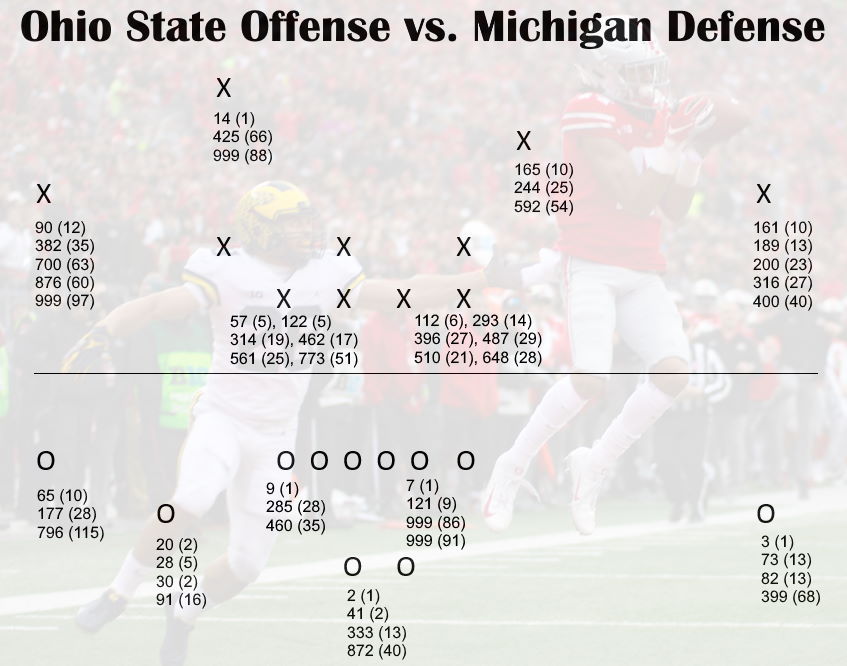 Twelve of Ohio State’s 22 players listed above are former Top 100 recruits, including all four slot receivers, which has proven difficult for Michigan to defend over the last few years.

All told, the Buckeyes have eight receivers who were Top 100 recruits and they will be matching up against a Wolverine secondary with just two former Top 100 recruits. None of those eight receivers are Chris Olave, by the way, who has produced three touchdowns against the Michigan defense the past two outings. He was the No. 399 player in the 2018 recruiting class, proving once again that rankings aren’t perfect (not that anybody here is trying to prove that point).

Since Brian Hartline took over as Ohio State’s receivers coach, the Buckeyes have signed six wide receivers and currently have two receivers committed in the 2021 class. All eight of those receivers are Top 100 players.

The average ranking of Michigan’s 2019 and 2020 cornerback signees is 357 and their average position ranking is 29. If we remove the outlier, who is ranked No. 876 overall, things look quite a bit better. The number drops to an average rank of 253, but that’s still over 200 spots lower than the average matchup they will face against the Buckeyes.

Sure, some of those corners may end up at safety, but that doesn’t fix the issue at hand. Ambry Thomas — headed into his final year — is Michigan’s lone Top 100 player at cornerback.

While things continue to get better (in recruiting terms) at Ohio State, the exact opposite is happening at Michigan. And it’s not like it’s just the top two corners who have to play against the Buckeyes. At least three need to be out on the field — and with the way OSU uses their slot receivers, it’s not a good idea to use a safety or the least-talented of your three corners in the slot.

Michigan sophomore Daxton Hill had some very nice moments last season as a true freshman, growing into the nickel role. Will he be the slot corner against Ohio State? Or would you rather have his speed and range back deep to help out against Chris Olave. These are serious questions because even with Hill as the No. 14 player overall in the 2019 class, the average ranking of Michigan’s safeties is 407.

What About the Pass Rush?

As we all know, a good pass defense starts with a great pass rush. There are 12 Michigan defensive ends listed above. Some will have to move inside because they don’t really have a lot of tackles. That may improve their pass rush from the interior, but it won’t do anything to help their run defense.

Of course, Ohio State’s starting tackles in 2021 look to have an average ranking of 8 overall and 1 at their respective position.

Quarterback should probably also be mentioned, where the Buckeyes have four scholarship players on the roster. The good news for Michigan is that the average ranking for the Buckeye quarterbacks is 312. The bad news, however, is that part of that average is named Justin Fields.

Ohio State currently has commitments from McCord, the No. 8 wide receiver (Marvin Harrison, Jr.), the No. 12 wide receiver (Jayden Ballard), and the No. 15 offensive tackle (Ben Christman), all of whom are ranked among the top 107 players in the 2021 class.

Michigan currently has two 2021 commitments, neither of which address the pass defense concerns.

The Wolverines’ last 2021 commitment came in May.