This is the fourth in our series examining the Ohio State and Michigan football rosters through the scope of recruiting that began last month.

The first piece was just an overall look at both rosters and it revealed findings such as the OSU roster has 33 players on it who were ranked in the top 100 of their respective recruiting classes. Michigan, on the other hand, has only five. That’s quite a stark contrast between the two rivals, but one that mirrors the results on the field perfectly.

When looking at Michigan’s passing game against the Ohio State pass defense, the findings showed that the Wolverines have no top 100 players in their passing offense (QB, WR, OT), while the Buckeyes have eight players in the pass defense (DE, CB, SAF) ranked in the top 100 of their respective recruiting classes.

Granted, in Michigan’s offense, the tight end should be included here, but since none of them are top 100 players either, nothing really changes.

Now we turn to the respective running games against the rush defenses, and when we eventually get to Michigan rush offense we will finally get to the Wolverines’ lone top 100 player on offense.

But up first, it’s the Ohio State running game, which includes the offensive line, tight end, quarterback, and running backs. They will be compared against Michigan’s run defense, which is basically just their front seven.

Here is a look at the numbers at each position. The rankings in parentheses are where they ranked at their respective positions. The number outside of that is their overall rank in their respective classes. 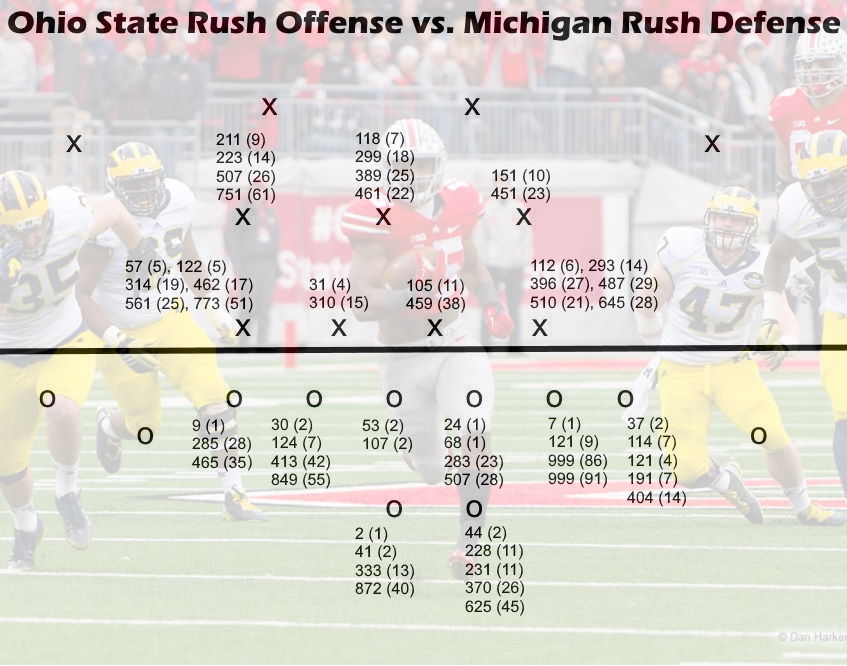 When it comes to the Ohio State – Michigan rivalry, in general the team that runs the ball better in The Game wins. For a while now, that has been the Buckeyes.

Just over the last 10 years, here is how the matchups have gone in terms of rushing yards.

As you can see, the team than runs the ball best, wins.

Now when you apply that belief structure to the recruiting rankings of Michigan’s front seven against Ohio State’s offensive line and quarterbacks, tight ends, and running backs, the data should be concerning for Wolverine fans.

There are two top 100 players in Michigan’s run defense. One of them — defensive end Luiji Vilain — has been injured for much of his Michigan career. The other is defensive tackle Chris Hinton, who was a true freshman last season and played sparingly.

Incoming freshman linebacker Kalel Mullings is the only other player in the front seven ranked among the top 10 recruits at his respective position.

Now when we compare those numbers with the level of players they will be competing against, things start to look a bit 56-27ish.

At every spot in the Ohio State running game, they can field a player who was a top two recruit at his respective position. That’s all across the offensive line, including the tight end. And then quarterback and running back as well.

Now, not all of those guys are starters, which may actually make Michigan fans feel worse.

Overall, there are 10 Buckeyes in the rush offense who were ranked in the top 100 as recruits, compared to just two for the Wolverines.

Let’s Take A Look At That Ohio State Offensive Line

The Ohio State offensive line — including the tight ends — have players at each position who were 5-star recruits at one point. Now, they didn’t all stay there, but they also didn’t drop down into obscurity.

Also, the second-highest rated player on the OSU offensive line is incoming freshman Paris Johnson at No. 9 overall, which doesn’t really mean much for the 2020 season as he isn’t expected to start. It does, however, provide a bit of foreshadowing into the future.

Starting left tackle Thayer Munford was ranked No. 285 overall in the 2017 recruiting class. He was the third-lowest ranked signee for the Buckeyes that year and was also a Second-Team All-Conference selection last season.

Overall, Ohio State has six offensive linemen who ranked in the top 68 as recruits. The entire Michigan team has four players who would fit that criteria. Fortunately, two of them are on the defensive line in Chris Hinton (31) and Luiji Vilain (57).

The Buckeyes also have seven offensive linemen who ranked first or second at their positions in their recruiting classes.

The only player on Michigan’s roster who ranks in the top two at his respective position as a recruit is sophomore linebacker Daxton Hill, who was the No. 1 safety in the 2019 recruiting class.

A Glimmer of Maize and Blue Hope?

McCall has rushed for 553 yards in his career, which is below expectations. He has also moved back and forth from tailback to receiver, so that has led to some of the consistency issues as well.

But when you look at the recruiting rankings outside of McCall and Sermon, maybe there’s some hope here for Michigan.

It probably needs to be mentioned that having the No. 1 dual-threat quarterback in the 2018 class (Justin Fields) makes each of those Buckeye running backs more effective.

It probably also needs to be mentioned that Ohio State’s 2021 recruiting class features two of the nation’s top six running backs and both are top 100 players.

How is Michigan combating that in their own 2021 recruiting class?